As the ball dropped in New York on New Year's Eve and we all celebrated and made resolutions and promised to go to the gym as soon as we finished off the Christmas cookies in the freezer, a nearly forgotten presence–deep and ageless–began to awaken from its year-long slumber.

It slowly opened a yellow, misshapen eye. Glitter flaked from its back and spiraled to the ground as it stretched and consciousness flooded back into it. It licked its dry, scaly lips and a thin, crooked smile spread across its flaking, poorly pained face.

We all felt it.

We knew, deep within our bruised and battered souls.

The Gift Swap of Doom was upon us.

Arrangements were made. Plans were written and sealed in blood, and soon, everybody arrived with appetizers!

Due to a family emergency, my darling wife, Kerri flew to Florida just hours before The Swap, leaving me and our children to fend for ourselves in this, our time of greatest pain and suffering.

Because I am a technological wizard (ask anyone who has tried to call me on the disposable $10 cell phone that I generally leave dead in my car), I have been able to create this blog using KerriVision™, a proprietary technology that allows Kerri to share her real-time reactions to The Swap.

How do you feel about KerriVision™, Kerri?


So, without Kerri's steady hand at the wheel of this social gathering, moments before kick-off, I had to put out a desperate last minute plea for paper plates and plastic utensils from our friends because I had neglected to buy any.

But fear not. Our friends came through, as they always do. They arrived with plenty of bowls and spoons and prevented us all from eating everything with our hands.

Which, this year, was even more important than usual.

Tim and Katie brought a pot of spicy meatballs.

The meatballs were a bit spicier than planned, however. Katie ate a few, turned a brilliant shade of red and spent the rest of the evening warning people that the meatballs were REALLY hot.

I scoffed. "Pffffft," I said, swaggering to the crock pot, "Stand back. I ain't afraid of no meatball."

I tried, for several minutes, to spear a meatball on a plastic fork.


If people hadn't brought those plastic forks to use on Katie's Meatballs of Eternal Alimentary Suffering™, several of us would now be walking around with smoldering, charred stumps where our hands had been.

Ben and Ann arrived in full Swap regalia. They are in favor of adding a costume element to future swaps so that we look as bad as we feel at these events.

I'm totally on board.

Let's see what Kerri thinks of their outfits. Kerri?


As usual, the evening started off with casual eating and drinking and delightful talk with great friends.


I need to explain here that we all LOVE having new players at the Swap. Simply because they typically just don't get it. They show up with a tacky little soap dispenser that they bought at the dollar store and stagger home a few hours later with bruised soul; a 5 foot tall triptych of nude, crying clowns riding deformed unicorns across a motion-activated, musical, mirrored waterfall; and a lifelong distrust of all of humanity.

Mim & Jo were new players. We were giddy with the prospect. Right Kerri?

In addition to Ben & Ann's suggestion that we dress for the occasion, Julie suggested that we bring drinks that we want to, perhaps, divest ourselves of and swap them.

To that end, she brought a bottle of mead to share with anyone foolish enough to try it.

To add a thin but hostile patina of of tension and anxiety to the evening, we always put all the gifts in one spot so people can inspect the year's offerings and clutch at their hearts when they see the size of them.

Kerri, even in her absence, made an impression.

Our son Alex had recently shipped a mountain bike home from Montana. We had the box. Kerri suggested that we use the box.

When we could not cram another delicious, throat-searing meatball into our stomachs, we knew the time was upon us.

The Swapping of The Gifts.

We performed the secret ritual chanting and dancing and howling that are proscribed in the Rites of the Swap and got down to it.


When all the names were picked, The Swap began. As our newest players, Mim and Jo opened theirs first. They had selected Ben & Ann's gift.

Please enjoy the expressions on their faces as Mim & Jo experience their first Swap gift.


Since Mim & Jo went first, their gift gets opened next.
Julie, smug in her enviable position as the possessor of the newbie's gift, was happy and confident opening it.

Mim & Jo, on their first try, had proved themselves to be formidable players.

And why is that?

It seems that Mim had been reading my old blog posts about The Swap.

THAT, my friends, is dedication and we all applaud her for it.

We also fear what she and Jo will bring next year, right Kerri?


I had selected Julie & Scott's name, so I was up next.

What do you think, Kerri?

Tori was thrilled with it, too!

Obviously, Julie's personal pathological fear of clowns has been cured by years of heavy exposure to all forms of horrible clown art at The Swap.

Tim & Katie had our name so it was time for them to open the giant box. They tried to get away, but I had had the foresight to smear meatball juice on all the doorknobs and window locks to thwart any attempt at escape.

With a quiet dignity that impressed us all, Tim sat in the corner and sobbed for much of the rest of the evening. Katie sat by herself and toyed listlessly with a bowl of meatballs until her fork was a melted, useless wad of plastic. She muttered something about getting new friends.

Next up - Dave and Kristen!


Once they had washed their hands and, presumably, their eyes, Dave and Kristen presented their offering to Nichole and Ryan.

Ben stood, adjusted his sweater, steeled his nerves, and tried to dive through the window to escape.

We caught him and forced him to open the gift from Ryan & Nichole.

The gifts were opened, the meatballs were eaten, the drinks were drinken.

Tim stopped sobbing long enough to helpfully hang up our piece for us.

We arranged the gifts in an awkward, shambling display so we could admire them all together in their full glory.


Soon, it was time to pack up and say our goodbyes. 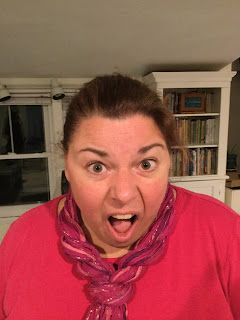