I'm not sure if this has ever happened to you, but you know when you go into a radio station to play some children's music with your buddy and one of the engineers hands you a piece of paper to sign and you read it and the paper has so many swears on it that there is very little white space left on the paper?
You know that?
It happened to me again.
Last Saturday, I was supposed to go to Boston to be on the radio with Steve Blunt and our special guests, The Spaghetti Cats (my daughter Tori and her friend Leea).
The weather, as has happened so often this winter, did not care for our plans and forced us to reschedule to Sunday night.
Super Bowl Sunday.
I, and I realize I am a minority in this, do not care for football. I do not care for sports in any form, except for a very occasional hockey game. I enjoy doing things like hiking and biking, but watching a bunch of guys chase after a ball, or hit a ball, or kick a ball, or bounce a ball holds very little interest for me.
I know, I am in the minority in this mind-set. Many of the people I know are brought to toe-curling shrieks of ecstasy by the thought of sweaty guys throwing balls to each other.
I sincerely hope that the unfortunate coincidence of us being on the radio at the same time as the Super Bowl didn't have too great a negative impact on the Super Bowl's ratings.
Those of you fortunate enough to have listened to our show were richly rewarded by that fact that you did not hear any foul language.
At all.
And there's a good reason for that.
First, the very notion of going on live radio during a children's music show and firing off a few F-bombs seems like a counter-productive move from a career building point of view.
But just in case we thought that swearing for 15 minutes on a kid's music show would be a good idea, one of the helpful engineers in the studio handed us this agreement to sign: 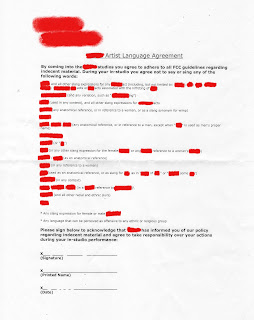 I have taken the liberty of spending a few dozen hours laboriously removing all the foul language from the form.
If you choose to use this altered document as a sort of x-rated Mad-Lib, then I can't stop you, but I also won't be held responsible for the results.
This is not the first time I have seen and signed this particular agreement. The first time I saw it, I laughed so hard that I got a stomache ache and had a hard time playing the harmonica.
The engineer who handed me the agreement last Sunday remembered me this time. He said, "You're the guy who thought the on-air language agreement was so funny, aren't you?"
I would have answered him if I hadn't been laughing so hard as I read it again.
The language in this agreement is awesome in its breadth and scope and stunning in its precision. The very concise nature of it make me think that there is an "incident" behind every word on it. A black radio moment when engineers, hosts, and staff stared at each other in horror and thousands of listeners rolled around on the floor laughing and screaming, "Did that guy just say @#$% on the radio?"
I scanned the agreement again, making a mental note of some of the juicier expressions.
"Do the kids have to sign this?" I joked.
The engineer scratched his head for a minute. "I don't know," he answered, "I'll go check."
He strolled out of the studio, leaving me to wonder what sort of cosmic retribution would await me should my daughter and her friend catch even the slightest glimpse of this encyclopedia of obscenity.
I am happy to report that they were not required to sign the paper and even happier to report that neither of them did any sort of swearing.
When they are ready to start swearing, however, I'll make sure that they have access to this paper so they can be sure to get the spelling and usage correct.
Email ThisBlogThis!Share to TwitterShare to FacebookShare to Pinterest
0 comments