Tell Me Again How This Is MY Fault... 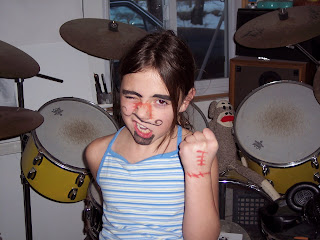 The other day, I was working in the studio and without warning, my daughter jumped through the door yelling "YEEEEAAAAARGH!"

She had spent the previous 20 minutes hidden away in the bathroom painting herself up to look like a terrifying pirate.
I know, the first question that you have is, "Where did you get that Sock Monkey in the picture?"

She painted scars around her nose (it had been reattached after a sword fight).  There is a similar scar around the circumference of her neck, indicating
1. A really, really good ship's doctor.
2. A need for more practice with the swords.

When these events occur, my wife turns to me and says, "This is your fault, you know. She doesn't get this from me."

Which, I suppose, is true enough.

Both of my kids are prone to these sorts of eccentricities. My daughter much more so, however. When she was born, I was thrilled that I had a daughter that I could horrify. I had planned to drive her to school dances in my undies. I had planned on showing embarrassing baby pictures to friends. I had many, many plans.

But this is how things turned out.

YEEEEAAAAARGH!
Email ThisBlogThis!Share to TwitterShare to FacebookShare to Pinterest
1 comments