The star of my next book, The Messiest Desk, is an intrepid girl named Julie Lemire. Not only is she a character in my book, she's my good friend and her real name is Julie Lemire. She is trying to hike all the 4000 footers in NH (I believe there are 4.5 billion of them) and she occasionally allows me to tag along, most likely for comedy relief or, possibly, so she can eat me if we get hopelessly lost and the food supply gives out.

As we were climbing the gentle ascent of Mt. Starr King a couple of birds began flitting around us. "They're vultures," I panted, "They sense imminent death."
"They're gray jays," Julie said, "And they're very friendly. Actually, they'll eat right out of your hand."
This, I did not believe.
"That, I do not believe," I told Julie. "You obviously have altitude sickness and have begun to lose your mind. Perhaps we should retreat down the hill."
"No. Seriously. They'll eat right out of your hand," Julie insisted.
"No. Seriously. Let's go back to the car. I'll buy you an ice cream or some oxygen on the way home. We'll come back some other time. The mountain will still be here."
Julie began rummaging around in her back pack and pulled out a large bag of trail mix. Every hiker in NH is required, by state law, to carry a bag of trail mix while hiking.
She dumped a small handful of the assorted twigs and berries into her palm and held out her hand.
"Come on, Julie," I coaxed, "Some tasty ice cream... Let's head down and get you some thicker air."
She shushed me and stood still, her hand held out like some devout worshiper offering a tasty high protein sacrifice.
Then, within 15 seconds: 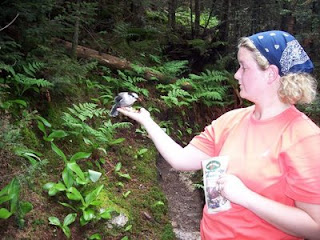 We carried on with the hike, but any time I doubted anything Julie said she would merely hold her hand out in a pose of offering and I was forced to admit that she was not delusional.
In fact, when we stopped for lunch at the cloudy, zombie-fog enshrouded summit of Mt. Starr King, I snitched some of her trail mix: 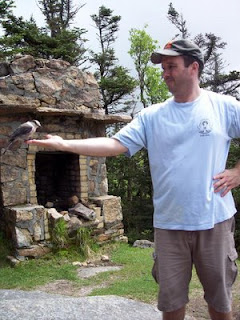 I spent the rest of the hike trying to convince Julie to speak to the animals and make them carry us down the mountains. I thought that if we coated ourselves in trail mix enough gray jays would come that they could fly us to the peaks of all the 4000 footers, thus eliminating the need for all that painful hiking.
My pleading and whining was to no avail. Julie would not use her creepy powers for our personal gain. We had to hike down the mountains, but we did get ice cream (after we washed our hands).
Email ThisBlogThis!Share to TwitterShare to FacebookShare to Pinterest
2 comments 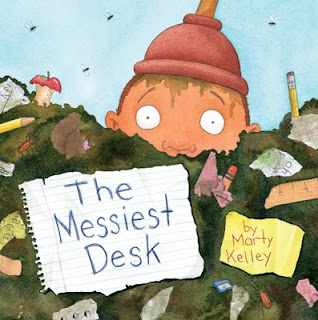 Whoopie! I finally got a finished, bound copy of The Messiest Desk and it looks great! I'm really happy with this book. It seems that it may actually be available in late summer. I did all the design work in this one and, while there was a steep learning curve using a new application, I'm pretty happy with the way it came out. Maybe I'll get into the whole world of book design next...
I'll let you all know when the book is actually available so you can run out and buy several dozen copies.
Email ThisBlogThis!Share to TwitterShare to FacebookShare to Pinterest
1 comments 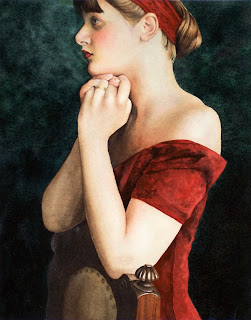 Okay. Get off my back. I know. I know. I haven't posted in a loooooong time. I thought about trying to do a sketch of the day or something, but I really don't think I could keep up with it. The sketches, yes. The posting, no.
So I'm trying something different here. My last post was a brilliant piece of art by my buddy Oliver. Today, the fan art is mine. I'm the fan.
The painting above is a copy I did of part of a painting by the amazingly talented Paul McCormack.
Next month, I'm taking off for New York to spend a week studying with him. Very exciting.
I'd like to start doing more portraits of people and will be updating my website soon to reflect that.
On the book front, everything is going well with The Messiest Desk. I've seen some of the printed pages and it looks great. It should be ready for shipping sometime near the end of July.
Whoopie!
I was contacted by an agent at a big literary agency and am hoping that she will want to represent me.
It will be lots of fun to be able to say, "Let me discuss that with my agent." to people. Like when my lovely wife wants me to set the table. "Let me discuss that with my agent. I'll get back to you."
Oh yeah. I can't wait for that.
I'll keep you all posted on what's happening.
Email ThisBlogThis!Share to TwitterShare to FacebookShare to Pinterest
1 comments