Kitties, Unicorns, Children, and Other Instruments of Torture

Look, I don't want to sound all whiny and pathetic. I know, technically speaking, this is all my fault. I brought it upon myself and, should I wish to, I could stop any time.
But, seriously - WHY?


Every year, after the hectic chaos of the Christmas season has passed, a small group of our very good friends gather at our house for a few hours of festive fun, capped off with about 10 minutes of heartless cruelty, followed by a year of regret, remorse, and greasily simmering resent.

We've been doing this for a long time and, it would seem, we just don't learn.

I would like to take a moment to beg anyone reading this post to please join us for The Swap next year. We need fresh meat. We are all battle-hardened veterans who play–not for fun–but to cause the other players actual, irreparable mental harm.

Deep down, we want nothing more than for someone to become physically ill when he witnesses the spectacular horror he will be forced to display for the next year.

If, for example, another participant were to open up a gift that I had submitted and, upon beholding it, began weeping uncontrollably, I would be filled with rapturous joy. If he also was so horrified by what he saw that he projectile vomited, it would add to my light-hearted happiness. If he curled up in the fetal position  and whimpered quietly and inconsolably for his mommy, I would feel that my life was complete.

And, naturally, all the other participants would feel exactly the same way if I had that reaction to a gift they brought.

Which is why we need new players. Players who don't get it. Players who think a tacky little vase will be a wildly successful entry. Players who will be reduced to helpless sobbing when they see the diabolical things that the rest of us bring to the swap.

We want to see the shocked horror in their eyes as the realization sets in that joining this swap was a very, very bad idea. One that will haunt them for at least a year.

Our newest players are Nichole and Ryan. They have been with us for several years and while we entertained high hopes when they were newbies, they never gave the rest of us the satisfaction (and relief) of entering a sub-standard gift. Their first year, they showed themselves to be worthy players and they have done nothing but get more and more evil as the years go by.

Honestly, I just want new people to play to increase my odds of not getting anything from them again next year.

After the frivolity and joy of eating and chatting, we solemnly made our way to the killing floor to begin The Swap.

A tense silence swept over the room as the sacred and ceremonial Choosing began. Names are drawn, fates are sealed, decorating schemes (and, occasionally, friendships) are destroyed.

Ben was the first to choose. To my delight, he drew our gift. Naturally, he was delighted, too. Ben and I have been the best of friends for over 30 years and I want nothing but the best for him.

See how happy he looks?

Now imagine the completeness of his joy when he and his family get to enjoy "The Brave One" for the next year. Naturally, I am happy for him, as well.


See the crushing despair in his face?

No. Me neither. And this is an odd and alarming thing about The Swap.  It gives you a deep insight into your friends' tastes.

You discover that your friends have no taste at all.
And neither do you.
And by "you", I mean "I".

Because it often happens that your friends open a package containing what you are certain is the most horrible thing even conceived by the mind of man.
And your friends love it.

Julie and Scott, for example, still have many glorious pieces from previous years hung up in their home.

Next up were Tim and Katie. They got a small gift, but one that was dense with profound ugliness.


The fear, of course, is that this cat, which is probably made of asbestos and painted with lead paint, will come to life and kill them in their sleep. This is a constant worry with many of the items given at swaps and one that all participants must be prepared to deal with.


Ryan and Nichole were the next victims. They were delighted with the small, portable size of the twin packages they got. "How bad could something this small be?" they wondered. 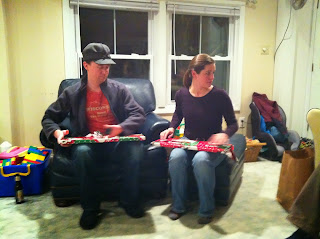 And then they found out. 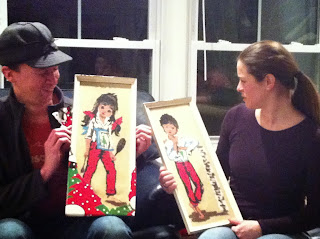 Pepe and Consuela are twin needlepoint Spanish children that Julie and Scott found at Hell's Knittery, a store where twisted, demonic freaks can sell their crafty needlepoint wares.

Julie and Scott, still delighted with the suffering they had inflicted on Ryan and Nichole by introducing Satan's needlepoint into their lives, accepted their gift with an almost careless ease. These are the people who willingly keep gifts up for years. They seem to look at The Swap as an opportunity to redecorate their home for free.

Kerri and I were up last, our anxiety levels having been given the opportunity to rise to near fatal levels.

Ryan's and Nichole's huge gift lay sprawled across the floor, silently mocking us.
"I am huge" it said. "And you will suffer every time you look at me."

I attempted to feign my own death, but apparently death is not an acceptable excuse for failing to open a swap gift.

In addition to being huge, this particular work of art is dense, clocking in at roughly the same gross weight as a 1958 Buick.

Once opened, I discovered an ethereal work of such transcendent beauty that I am rendered speechless, able only to gurgle a few wet gagging noises to show my appreciation.

The absolute and incredible ugliness of this piece simply cannot be adequately conveyed in a photograph. I warmly welcome any of you to come and experience it in person. You may even take it home with you so you have time to thoroughly explore its many disturbing artistic flaws.

The artist chose to put wings on one cherub only, leading us to believe that the rest of them are just naked babies, rendering the piece totally unfit for family viewing. The perspective is just skewed enough to make you wonder if the artist might have been drinking lighter fluid, or, possibly, painting while standing on his head with one–or both–eyes shut.

The one cherub with wings (all the way on the left) has an unfortunate physical deformity wherein its butt crack extends up to the base of its neck. Diapering that particular baby must have been a nightmare beyond imagining.

The two characters who are stepping from the frame (including Baby Butt-Crack) are no doubt working closely with Consuela in an effort to harvest human souls.I'll be sleeping with the lights on for the next year.

And, as I mentioned before, this thing weighs about 75,000 pounds because it is done, not on paper or canvas, but on a sort of formica-wrapped pressboard more suitable for making cheap furniture than fine art. Nichole has already requested its return at the end of the year so she can turn it into a sturdy and decorative table for use in human sacrifices and other fun craft projects.

My generous offer to allow her to take it home immediately and not make her wait a year was politely declined.

As the evening wound down, we dried our collective tears and made or way through what Tim described as the Seven Stages of Getting A Swap Gift.

I don't remember Tim's stages, but here are the ones I go through each year:

We do spend some time each year in deep contemplation of the fact that - somebody, somewhere MADE these things.

Intentionally and sincerely. These were all created as a sincere expression of art and beauty.

Except for the unicorn. That had to have been a joke. Right? 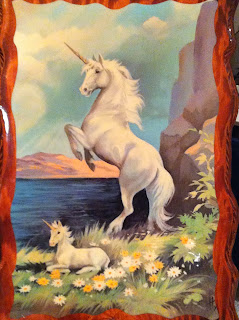