Look, I'm not going to lie. As much as I was looking forward to the art and museums and pizza in Italy, what I was really giddy with excitement about was Venice.
I wanted to cruise along The Grand Canal in a gondola. It has seriously been a lifelong dream.
And today, we headed to Venice.

The bus ride was long but we stopped a few times for "hydraulic stops", as the tour guide called them.
We broke down and bought a mysterious Italian snack called "Fonzies" at one of the stops. We had no idea what these things were and the package yielded not a clue about the contents, but they were called "Fonzies". How bad could they be?

I guess, really, as anchovies and squid are a pretty normal part of the diet in Italy, there was the very real chance that these were some sort of gorgonzola-dusted, olive-crusted fish balls. Still - we risked the Euro they cost and shared a package.

We made another stop for hydraulics and lunch, a grim sounding combination, but I feel that I have to take a moment here to chide, deride, and abuse my homeland.

I have had the grave misfortune to eat in American highway rest-stops before. If you haven't had the experience; congratulations. You win. If you have, I'm guessing that if you aren't completely insensate to taste, you will agree with me when I say, "yuck."

They are grim, gray affairs, full of grim, gray people eating grim, gray food.
Not so in Italy, my friends. They may not be able to scramble eggs and the shower stalls might all leak, but wow, those Italians can make a highway rest stop lunch.


The tour guide dragged me, screaming and crying, away from the meal and forced me back on the bus so we could arrive in Venice in time for another meal. With the taste of the wine still on my lips, we pulled into the parking area where we were to load onto our boats and head to Venice.


A brief word about Venice:
Wow.

A few more words about Venice:
Venice is an island off the coast of Italy in the Adriatic Sea. To be much, much more precise, Venice is actually 118 tiny islands all crowded together to give the illusion of 1 island. The islands are connected by over 400 foot-bridges and many miles of serpentine canals.

It is the largest pedestrian-only area in the world. There are no cars, no truck, no scooters on Venice. To get fro point A to point B, you either walk, take a boat, or swim.

(Note: Swimming is not recommended as a means of transportation as the water is... ummm... probably not a substance you want to have making prolonged contact with your skin.)

The ride to the hotel was spectacular and that was only a prelude of what was to come.


We soon arrived at our hotel which had, in an earlier version of itself, been a convent. I'm assuming there had been some updating or I have been grievously lied to about the vows of poverty that nuns take. The place was swank.

With a little time to settle in before we headed off to a group dinner at a local restaurant, we set out to see how long it would take us to get lost in Venice's winding, tiny streets.

Not long, it turns out. 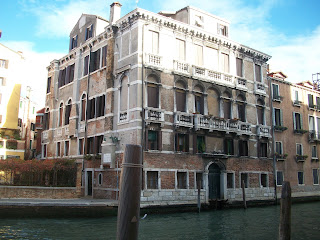 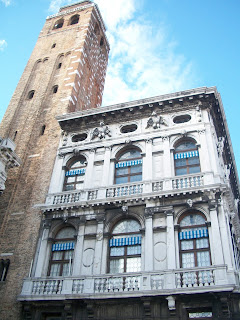 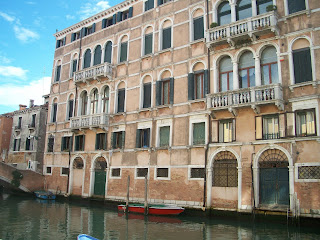 After walking about 12 feet from the door of the hotel, we were hopelessly lost. This place is really confusing. We did, somehow, manage to get back in time to join our group-mates (a term I will try to never use again) for dinner.

At the restaurant, the kids ordered wine for themselves, which kind of ticked me off because why should I pay for this when it is lying around all over the city for free.

While we were eating a couple street musicians barged their way into the restaurant and forced music upon us. I requested "Freebird" but these dudes claimed they didn't know it. Pfffft. As if.


(There is supposed to be a video here. Is it showing up for you? I can't see it. Grrr. Imagine some guys singing and playing instruments in a restaurant. Okay. Perfect. You've got it.)

After dinner, we were free to explore Venice. I suppose the thinking in setting us free was that, since it's an island, we can't get too terribly lost.

My big goal for the night was to ride the #1 Vaporetto up and down The Grand Canal.

Vaporettos are the public busses of Venice. But since there are no streets, they are boats. The #1 line runs back and forth up and down The Grand Canal. It goes more slowly than the other bus lines, so tourists flock to it as a relatively inexpensive way to view the majestic splendor of lots of other tourists all crammed together on a boat like sardines.

After only about two and half hours spent trying to figure out how to buy a ticket from the automated machines, we finally gave up and pushed our way through the "exit only" signs and bought tickets onboard from a man whom I dearly hope actually worked for the bus line. He sounded Italian so he seemed legit.


The ride was really amazing. The sun was setting as we headed out and the lights and colors danced on the water, shining in dazzling displays off the backs of huge water rats that darted along the side of the palaces lining the grand canal. 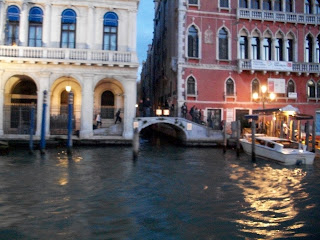 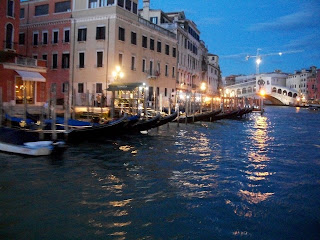 Too soon, our scenic ride on the #1 Vaporetto was over. It had been an experience like nothing I'd ever had. Venice is really an amazingly gorgeous place that is so differnt from any other place, it's almost disorienting.

We did eventually manage to find our way back to our hotel. Or at least to a hotel where our keys worked in the doors, so that was just as good. We had a big day planned for tomorrow.

I was drifting gently off to sleep, imagining myself aboard the gondola tomorrow, an accordion player and a singer belting out "O Sole Mio".

I smiled and nestled into my pillows. Just as I was slipping off to a well-earned sleep,  Kerri got really, really sick.
Email ThisBlogThis!Share to TwitterShare to FacebookShare to Pinterest
1 comments