My son, Alex is a confirmed Lego-maniac, often disappearing for hours on end in his room to create some elaborate masterpiece of engineering.
But now he has outdone himself. The other night I was slaving away in my studio when he came in with his hands behind his back. Instinctively, I sprang from my seat, executed a perfect ninja-like dive and roll, and hid behind my trash can. He smiled and brought his hands from behind his back to reveal the most exquisite, beautiful creation I have ever witnessed. 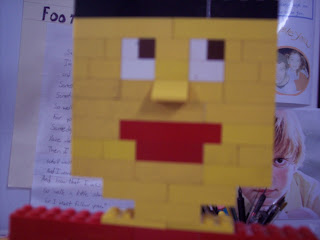 It was me.
Made out of Legos.
He managed to capture not only my rugged good looks and outstanding sense of fashion, but the arm is fully articulated and allows the Lego-Marty to move its hand in delicate, graceful arcs, as if drawing. 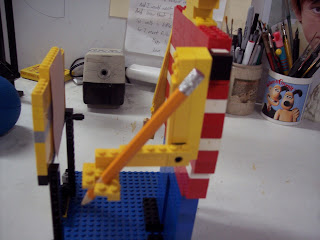 It was like watching a movie of myself. Except the Lego-Marty uses its left hand to hold the pencil, a feat I have yet to master.
While Alex was sadly unable to make the Lego-Marty actually draw without some sort of manual intervention, he did have the foresight to include an easel with an attached piece of drawing paper. 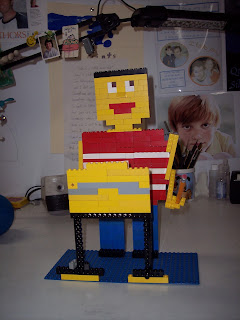 I've had the Lego-Me in my studio for several days, and while it does add a certain visual charm to the ambiance of my studio, I am sad to report that it has yet to begin actually doing my work for me.
I had secretly hoped that the Lego-Me would magically come to life at night and illustrate books for me.
At the very least, I had entertained the wish that I might be able to send it to schools to do author visits for me while I lounged around in bed, sipping coffee and reading. It's not that I don't like doing school visits. I do.
I just like lounging around in bed even more.
Alex is currently hard at work on the new, improved, school-visiting, book-illustrating Lego-Marty and I'll let him out of his bedroom as soon as it's finished.
Email ThisBlogThis!Share to TwitterShare to FacebookShare to Pinterest
0 comments 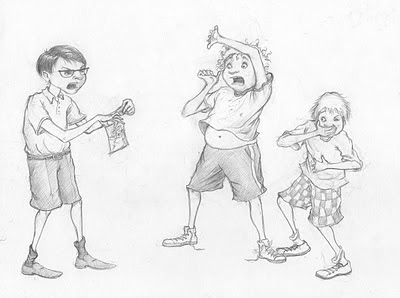 I really enjoyed writing it and Abi seemed to enjoy reading it. I sent the first book to her almost two years ago. She made some suggestions for revisions about the characters, the plot, the excessive use of boogers and puking I had employed, and I dutifully revised.
I continued working on stories about Simon because I really, really enjoyed writing them.
While they were under consideration by Tricycle, Random House bought Tricycle.
"This will be great!" everyone suggested, "Random House has much bigger distribution!"
I waited and waited to hear back from Abi about the fate of Simon, Munch, and Ralph.
There were big changes at Tricycle but things were moving slowly for my poor book.
Abi had suggested the book to me in the first place and I really liked working with her, so I was patient.

Eventually, I decided that something needed to happen with Simon. Abi was trying to get it published, but I was tired of waiting. I told her that I was going to start sending it out to other publishers and Abi said that I had been more than fair, letting them have it exclusively for so long. She said that she was still very hopeful that it would happen soon, though.

I sent Simon out to another publisher and heard back from them after about two weeks. The editor thought it was very funny and suggested some revisions that she would like to see.

I was debating about whether this was a development I needed to tell Abi about, when she sent me an email.

Random House is shutting down Tricycle.

I was terribly disappointed to hear that. I enjoyed working with Abi and I had been waiting over two years to find out about Simon. Just as it seemed to be happening, they are being shut down by the company that just bought them. If Tricycle had bought the book, it could have just been orphaned there, I suppose. It happens.
Abi has very kindly offered to pass the manuscript on to an editor at a different imprint at Random House.

Presumably, one that isn't being shut down.

So, in spite of all the anxious waiting and the disappointment, the bright side is that the book got written and now there is a publisher interested in seeing some revisions.

Maybe they'll publish it before they go out of business, too.
Email ThisBlogThis!Share to TwitterShare to FacebookShare to Pinterest
0 comments

And, it seems I've already used this title for a post. It's a good thing that Google is here looking out for me.
This is a pencil drawing I did as a demonstration for a portrait class I'm teaching. This one took a couple of weeks. I'm still not totally convinced that it's finished, but it's pretty darned close... 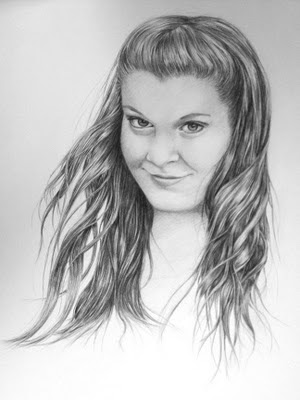 And Another New One

I just started this portrait of my little niece, Sarah. 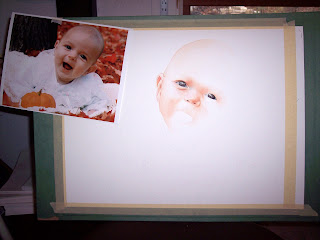 My little niece who now towers over me by several inches.

This is a necessary step in my artistic development.

Many years ago, Sarah's parents, Shelly and Greg, were kind enough to let Kerri and me live with them for a few months.

We shall see.
Email ThisBlogThis!Share to TwitterShare to FacebookShare to Pinterest
0 comments 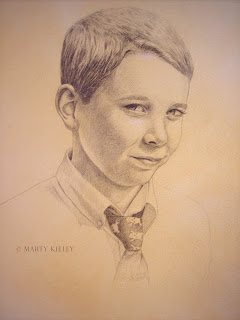 Here is a recent (like finished 2 hours ago) pencil portrait of Alex. This one took about a week and a half.

I tried a few new things here, all of which failed miserably, I'm afraid. The paper is too rough, I couldn't get nearly enough fine detail, I tried toning the paper with watercolor which, in theory, I like, but it looks a little wonky. I also tried adding white highlights and I'm not so happy with those either.

In spite of all that, it still looks like him, which is a good thing.
Email ThisBlogThis!Share to TwitterShare to FacebookShare to Pinterest
0 comments

Keene was Keen & A Possible Tattoo

First, let me apologize for that weak and fairly lame title to this post. It's early and my coffee has yet to fully kick in.

And, I'm still recovering from this past weekend at the Keene State Children's Literature Festival. It was an amazing experience being a speaker at such a prestigious event. And I'm sure that my presentation, full of references to farts and boogers, did much to enhance the overall tone of the festival. 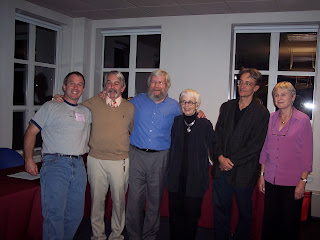 Certainly my failed attempt at putting bunny ears on David White during a picture taking moment added to the elegant glamour of the final dinner.

Pictured above are: Me (dressed in my finest formal jeans and t-shirt), David White (The festival organizer, whose hand is prepared to give me a Vulcan Death Grip should I try one more time to give him bunny ears), Paul Janeczko (A wonderful poet and very cool guy from Maine whose last name appears to be missing some vowels or something), Jeanette Winters (who had the coolest glasses I have ever seen - I suspect that they gave her x-ray vision, but she wouldn't let me try them), Chris Raschka (A Caldecott winning illustrator from New York) and Susan Cooper (author of The Dark Is Rising Series and a very funny lady).

David works hard at organizing this Festival lining up some of the biggest names in Children's Literature to speak every year.

I still cannot fathom why he asked me to participate.

My guess is that one of his festival advisers jokingly said, "You know what this festival needs? More booger jokes. And fart jokes." And David, perhaps in a weakened condition from correcting his ten thousandth term paper, agreed and emailed me, asking me to participate.

When I did get that email from David, over a year ago, I was so excited that I did a little happy dance around my house. It is fortunate for all of us that no video footage is available of that dance. Particularly because I got the email early one morning, and was still in my Homer Simpson jammies with the big rip in the seat.

I did however, post a short video of part of my presentation. See it over there on the right side of the page? I was trying to read some of my more serious poetry about wedgies and farts and the whole darned audience kept interrupting me with raucous laughter.

The entire festival weekend was a whirlwind of dinners, socials, gallery tours, lunches, and fun. David and his husband, Ken hosted a terrific party at the Irish Cottage that they built on their property. The whiskey flowed like wine. The Guinness flowed like whiskey.

It was an amazing experience and it would have been impossible to pick out one favorite part of the weekend if it weren't for a young lady named Rachel.

Despite all the terrific things that happened and the incredible honor of being asked to speak at the festival, the greatest moment of the weekend (and possibly my entire life) happened at lunch the day of the festival.

I had mentioned during my presentation that I am offering free books for life for anyone who is willing to get a Marty Kelley tattoo (see previous posts). I suspected that if there was ever a crowd where someone might take me up on this offer, a room full of teachers, college students, and librarians would be it.

Those people know how to party.

At lunch, Rachel - dear, sweet, wonderful Rachel - eclipsed all my previous earthly delights by saying, "$40 for a tattoo in exchange for all those books? Heck Yeah! I'm in! Do I have to get it in a certain spot?"

I explained that I did want to post pictures of her tattoo on this blog, so she might consider keeping it in a PG location, though, should she decide otherwise, I may start a different blog just to share it.

Perhaps she will attend next year's conference and you will get a chance to see it for yourself.
Email ThisBlogThis!Share to TwitterShare to FacebookShare to Pinterest
0 comments