Lord of the Flies - Welcome to the Fishydome

It's that time of year again, kiddos.
When the days grow long and sweaty and, for some reason that I still haven't figured out, I allow my old pal Julie to trick me into going on long hikes up big hills with her.

In her defense, I suppose, is the fact that if I didn't go on these long, sweaty, danger-filled hikes with her, I would most likely fritter my time away on inconsequential passtimes, like not sweating and being in pain and almost getting eaten by Bigfoot.

Julie is nearing the conclusion of her goal of climbing all the 4,000+ foot mountains in New Hampshire. It is alleged that there are 48 of them, but I do not believe that for a second. I have hiked at least 10,000 mountains with Julie and every time we finish a hike, she always says, "Well, just 10 left."

This summer's first hike was Mt. Cabot, which has the dual honors of being the farthest away, and the worst hike ever. Win, win!

Julie generally likes to begin the hikes early, so it's not uncommon for her to show up at my house at 6 or 6:30 a.m.  At first, I found this alarming. Being an author and illustrator, I had no idea that there even was a 6:00 a.m. Soon I got used to the idea and no longer found it alarming. Just annoying.

Julie insisted that this hike must begin earlier as the mountain is located somewhere in the very farthest reaches of the Canadian wilderness, bordering on The North Pole. To that end, she decreed that she would arrive at my house at 5:30 a.m.

It's even less pleasant than it sounds, my friends.

She dragged me to her car - a fancy new car, I might add; one with posh leather seats and all sorts of grown-up doohickeys - and I settled into the comfy leather seats and began 3 hours of incessant whining about how early it was. Julie ignored me and focused instead on bathing in the awesome splendor of her new car.

A few hundred hours later, we arrived at the Berlin Fish Hatchery, where our hike was to begin.

We were greeted with this not at all alarming sign.

"Oh, well," I said. "Looks like this isn't going to work out after all. How about if you just buy me some coffee, take me home, and I'll tell everyone that you actually climbed the mountain?"

Julie was as obstinate and unreasonable as ever and forged ahead, heedless of the fact that we may have to spend the night locked in a fish hatchery.

We passed an official looking vehicle and asked the Fish Hatcher about the gate. "We close it at 4," he said. "We lock it at 10, so you gotta be outta here before that or you're spending the night."

We parked the car and headed off into the damp, humid wilderness to spend the day sweating in nature. "You know it's supposed to be, like 95 degrees today?" I asked.

"Yeah," Julie said. "I do. Because you've told me that about a million times in the last 15 minutes."

"I just want to make sure that you don't die of dehydration," I said. "I'm not hauling your carcass down the mountain. I'm going to leave it up there to serve as a visual reminder to people about the dangers of hiking."

Julie must not have heard me because she charged ahead into the wilderness. The name, Kilkenny Ridge Trail made me think of this:

And I'm sure that my constant repetition of that phrase amused Julie throughout the long, horrible hike. Because I am hilarious.

The hike to the summit of Mt. Cabot begins with a walk of creeping horror along a trail overgrown with weeds, brambles, man-eating vines, and snakes as big as school buses.


I might have freaked out about this itching, scratching, claustrophobic, snake-infested path if I hadn't been distracted by the millions of biting, flying insects that accompanied us all along the trail for the entire hike. 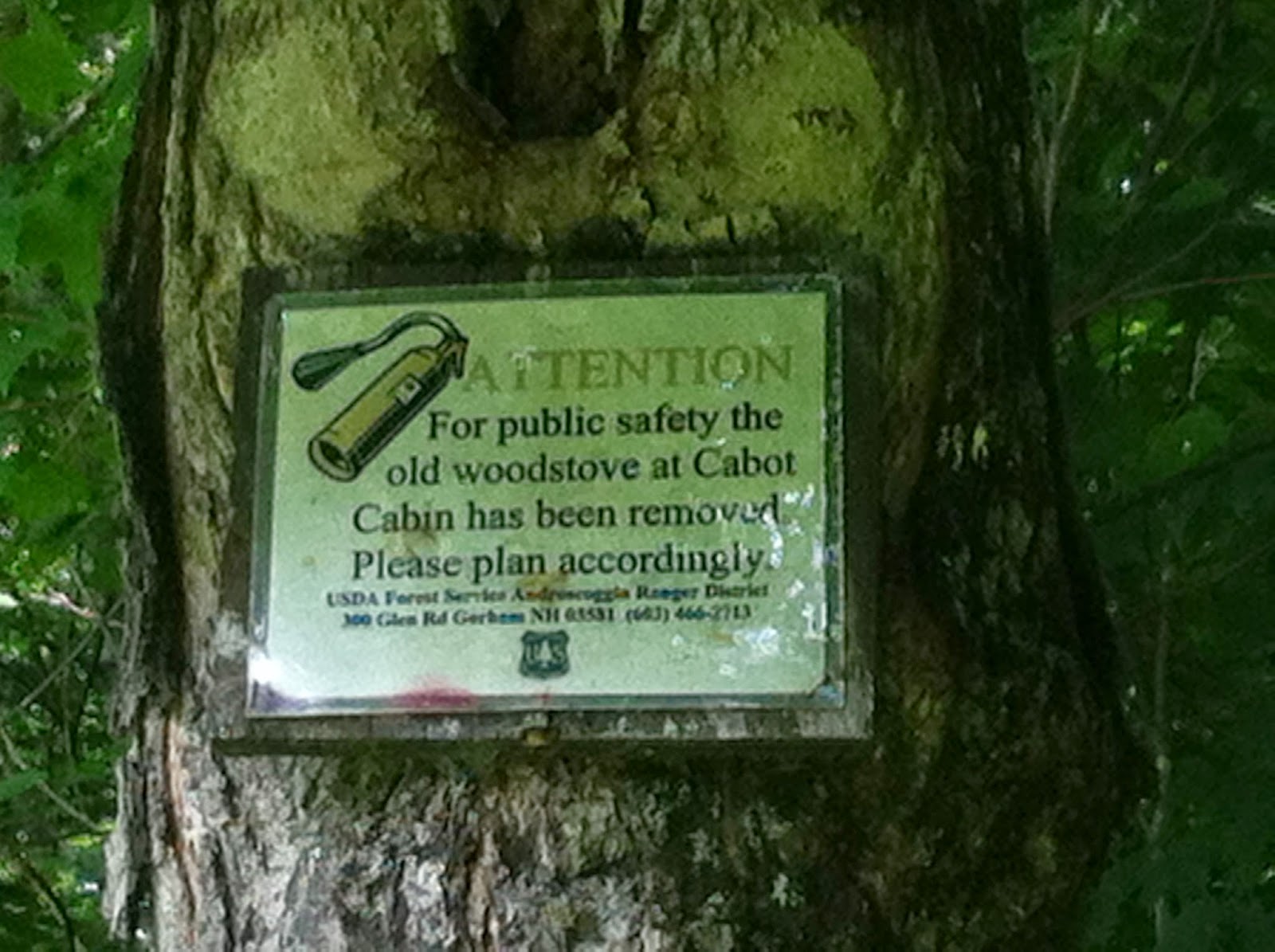 When we passed this sign, I tried to convince Julie that pressing onward would be foolhardy and dangerous. "What if we get stranded at the top and freeze to death because we can't start a fire in the wood stove?"

"It's going to be 95 degrees today, remember?" she asked, forging onward.

We hacked our way through the underbrush and the trail opened up a bit to reveal the fine craftsmanship of a well-maintained wooden footpath. 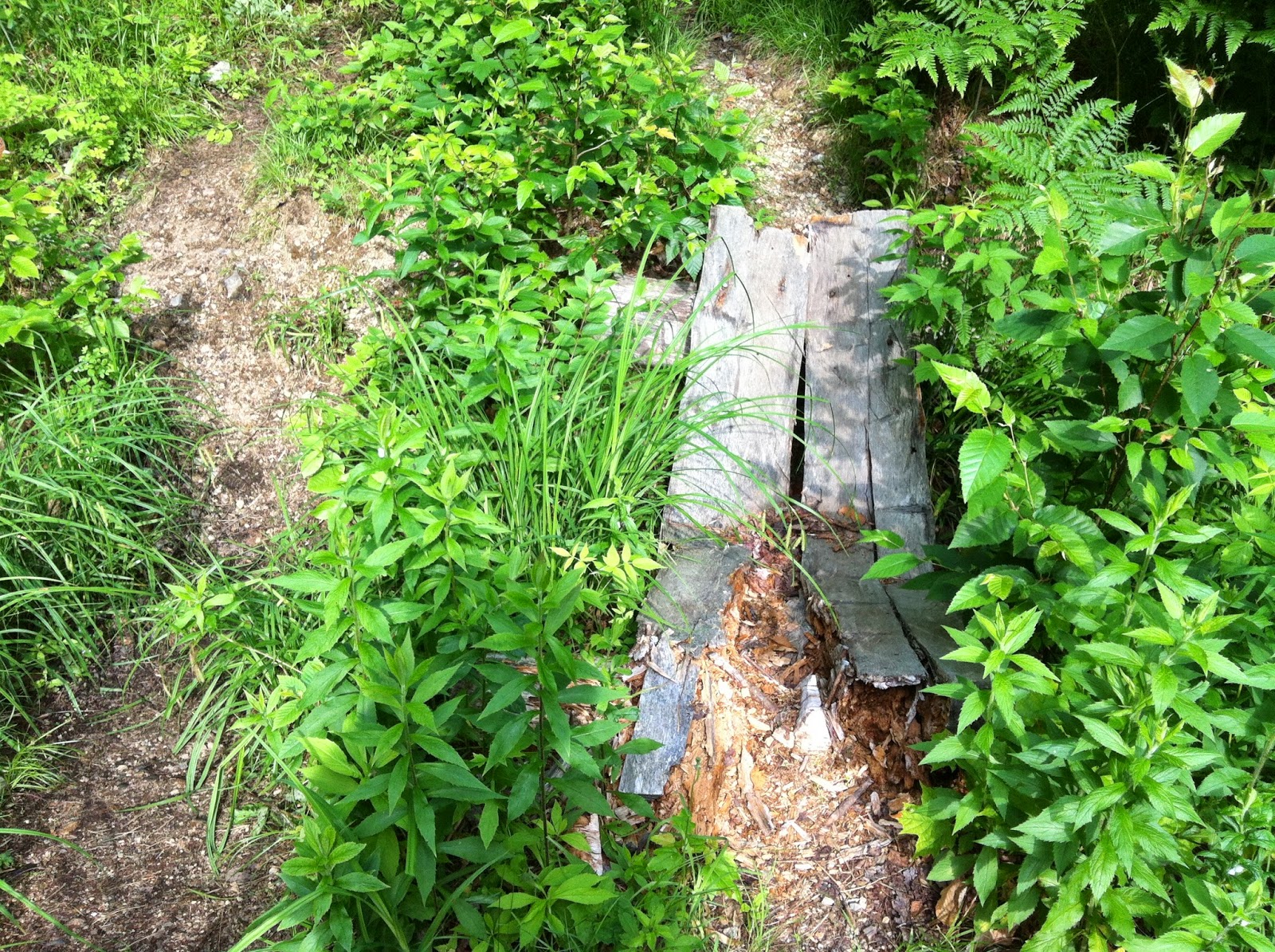 "Look," I said, pointing to the splintered wood. "Bigfoot did that. Let's go get ice cream."

Julie must be losing her hearing. She kept walking, oblivious to the fact that we were no doubt being stalked by Bigfoot as we headed toward the wind-swept summit, where we would freeze to death because of the lack of woodstoves. If the bugs didn't bleed us dry first. 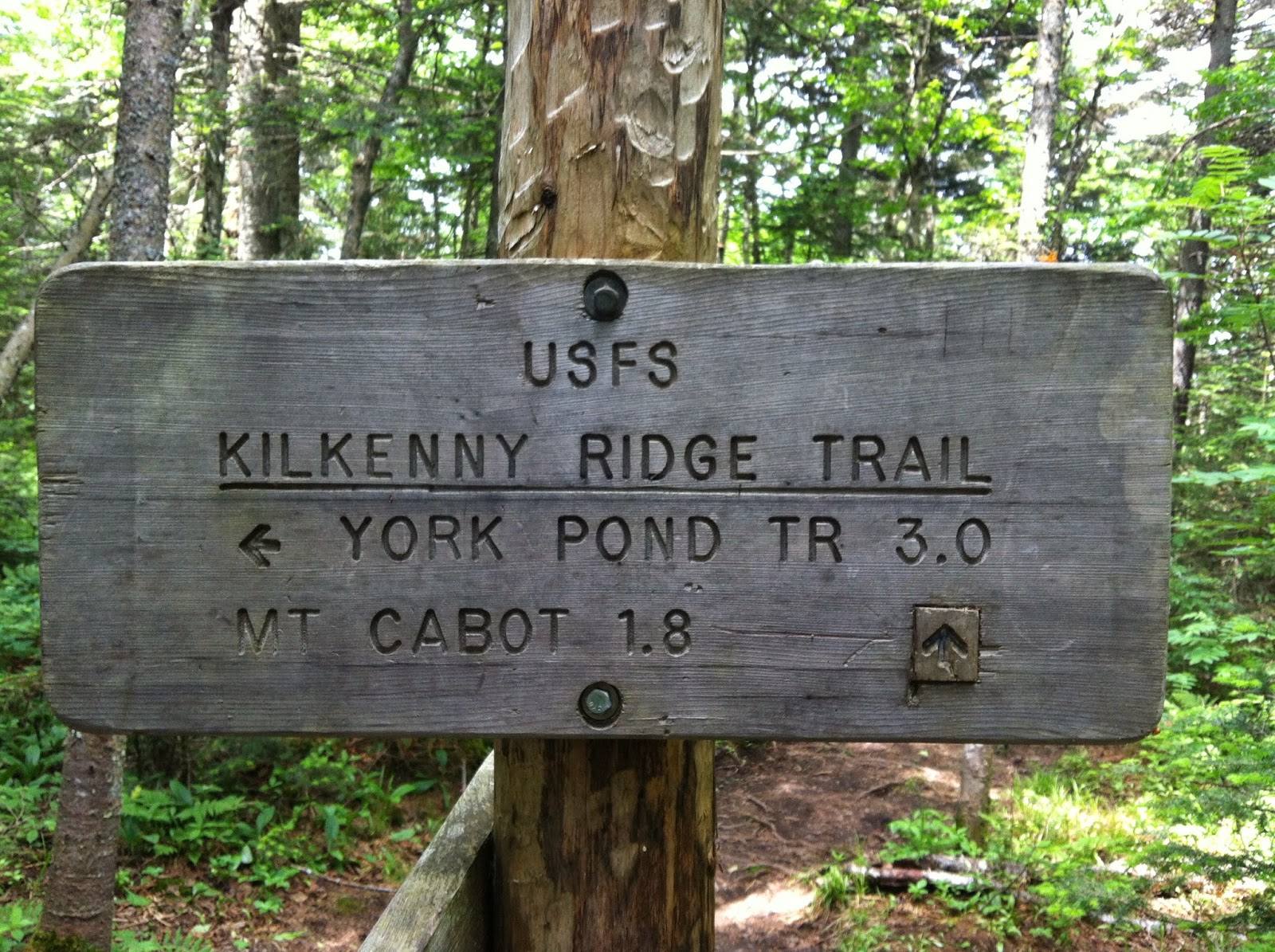 We soon reached a trail junction and Julie was undisturbed by the small square of wood that had been cut out around the arrow that showed the direction of our path.

"It's been cut out and replaced in the sign," I said. "Probably in the wrong direction. I'll bet that Bigfoot did this and that arrow points right to his lair. His family is probably all sitting around the table with napkins tied around their necks."

"It's Bigfeet," I grumbled. " Not Bigfoots. And that's not the point. The point is that the sign has been changed and we are going to get eaten by Bigfoot and his extended family."

Julie charged onward, perhaps spurred by the ever-thickening cloud of biting flies that swarmed around us.

"I told you this was the wrong direction," I said through the deafening buzz of insects. "The Omen. That was a great movie. Did you see that?" Julie asked, ignoring my pleas for mercy and trudging ever upward toward the unmaintained summit.

We spent a delightful few hours sweating and swatting and soon reached a cheerful sign indicating a view which was probably still maintained. 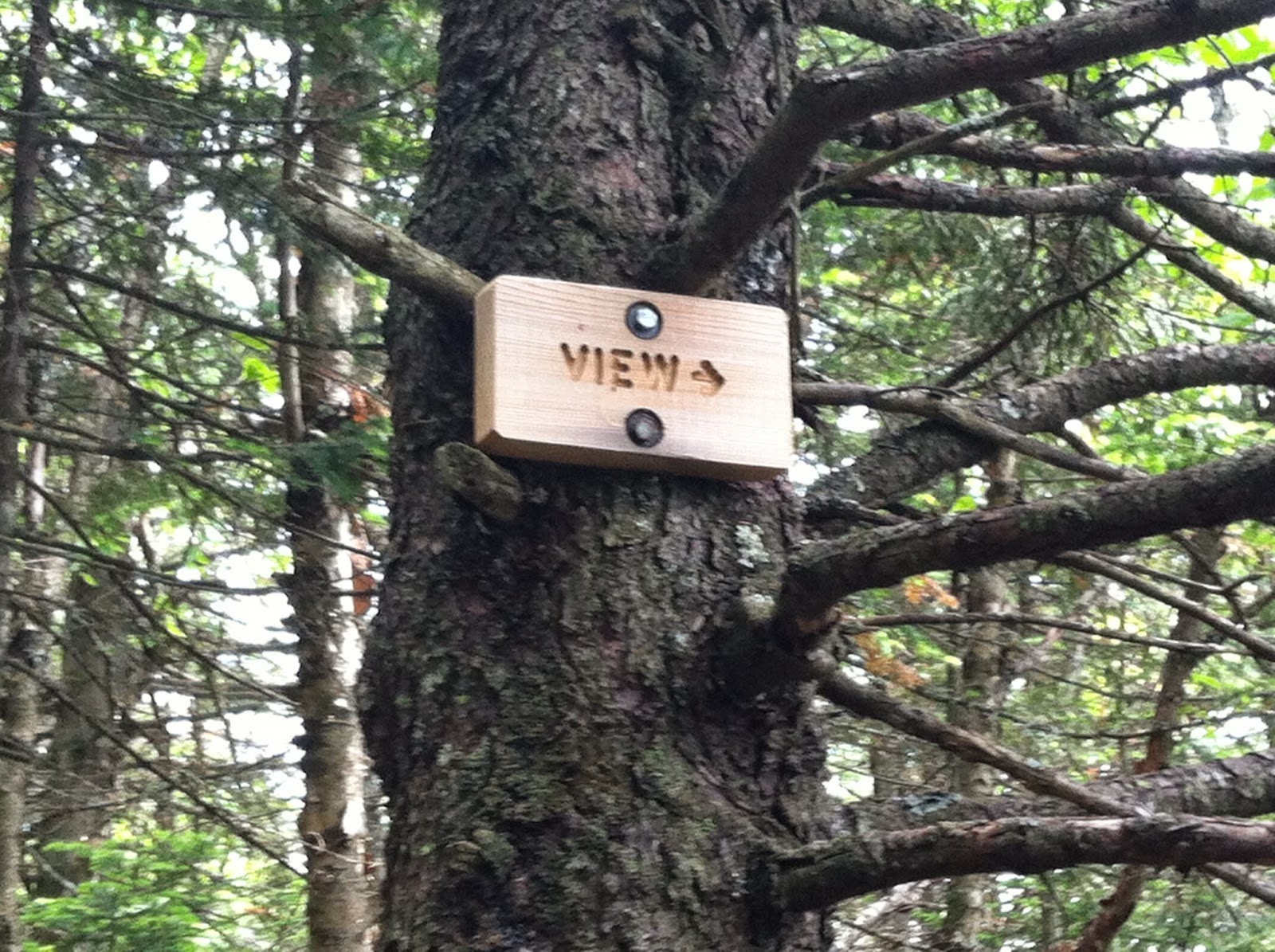 And, indeed it was.

After a delightful few minutes watching Julie futz with her camera, we plodded onward, propelled ever the more urgently by the incessant swarm of bugs who had obviously sent word to the relatives that a buffet was being served on the steamy slopes of Mt. Cabot.

"If I lose any more blood, I'm going to shrivel and die." I moaned. "Bigfoot will just have a dessicated slab of Marty jerky to eat."

Julie made a comment that involved the words "Marty" and "jerk", but I couldn't hear her over the buzzing of the bugs.

We staggered up the steep, rocky slope until we came to the Cabot Cabin, named after Mr. Cabot Cabin, who, in 1794, first stopped maintaining the trails on this mountain.

"HA!" I cried, my throat choked with dozens of bugs I had inhaled. "We can escape the bugs in there!"

We raced toward the cabin and yanked the door open. We were both blown backward by the thundering explosion of flies that erupted from the doorway.

"What the–" Julie might have said a very bad word except that she is a teacher and never uses such coarse language, so I obviously misheard her. She was probably talking about trucks or ducks.

We swatted away the flies and entered the cabin, which Mr. Cabot Cabin obviously stopped maintaining several hundred years ago, as well.

The initial cloud of flies, which numbered in the low tens of millions, was merely the welcoming committee, sent as emissaries, with greetings from the the billions of flies which remained in the cabin. 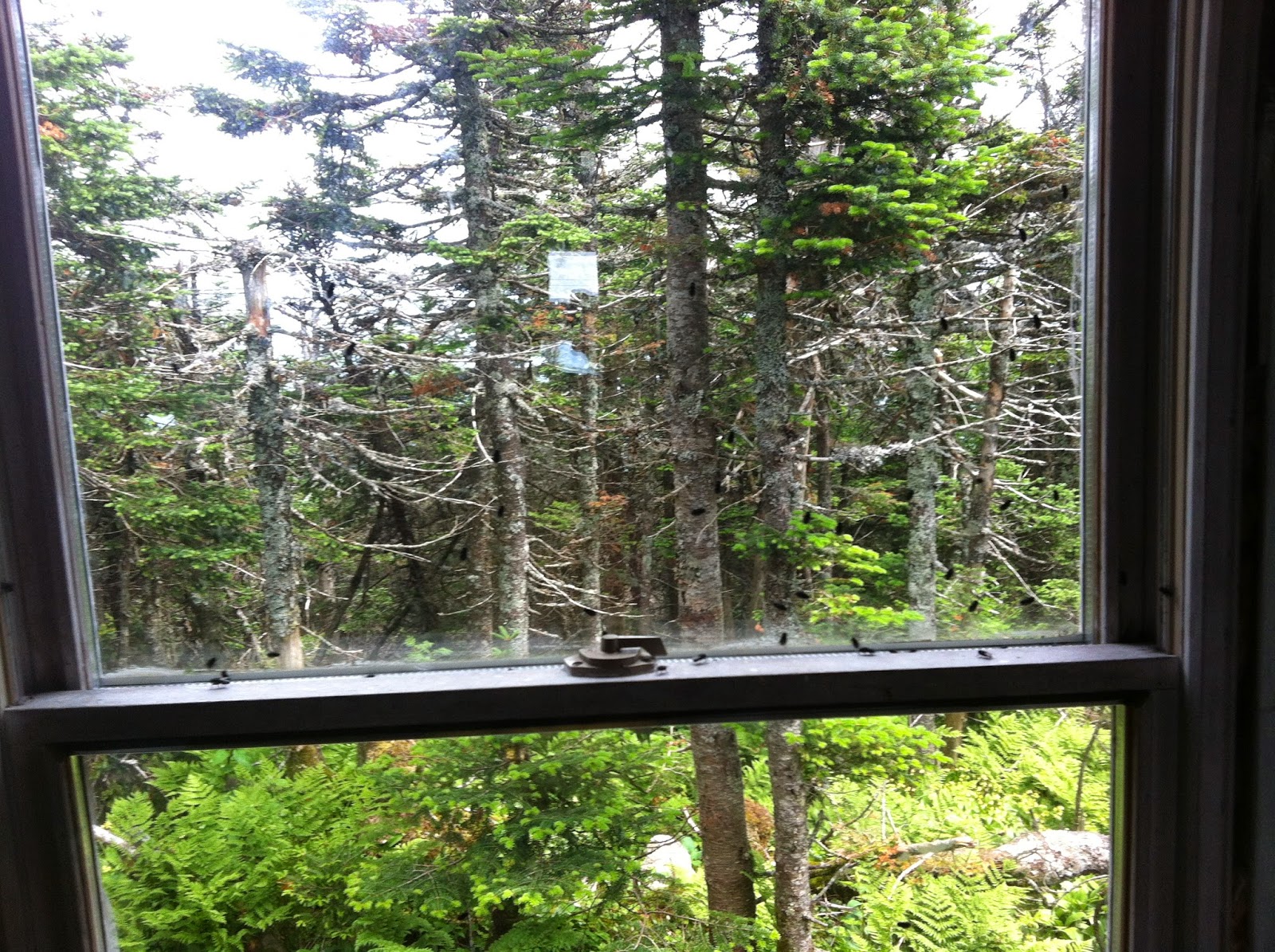 When we decided that we had inhaled all the flies our lungs could handle, we ventured back out to the great outdoors to visit with the swarming clouds of other insects who had hovered about the door, patiently awaiting our return.

We raced to the trail and, still disoriented by the bloodloss from all our bug bites, may have lost the trail if not for this helpful signpost. 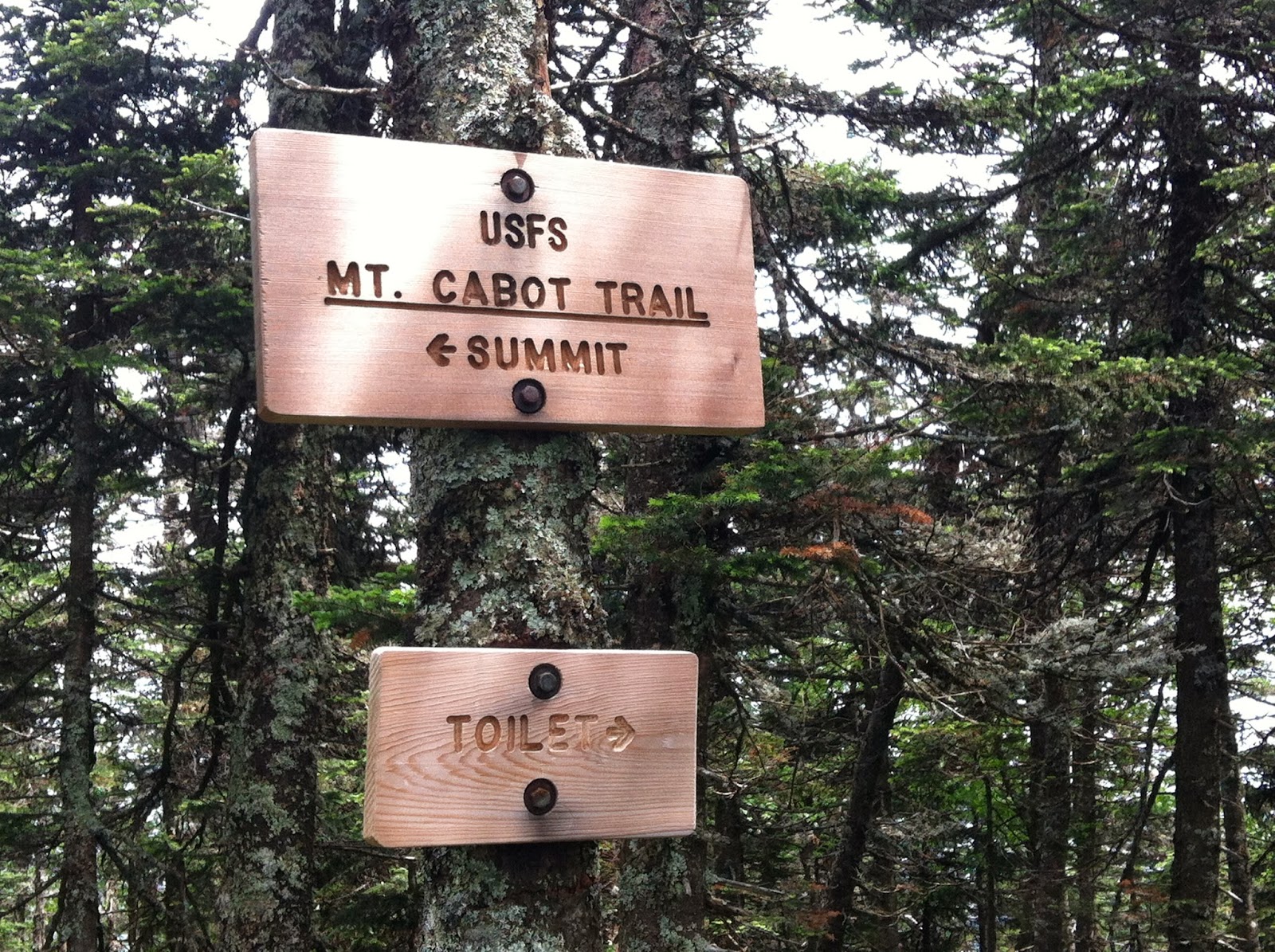 I was concerned that there was a need for these signs - that some hikers might not be able to tell the difference between the summit and a toilet. It did not bode well for the condition of the summit.

After a brief deliberation wherein we considered the condition of the kitchen sink and hypothesized about what the toilet might look like, we decided on a visit to the summit.

The summit was indicated by a stake in the ground and the thickest cloud of bugs we had seen yet. 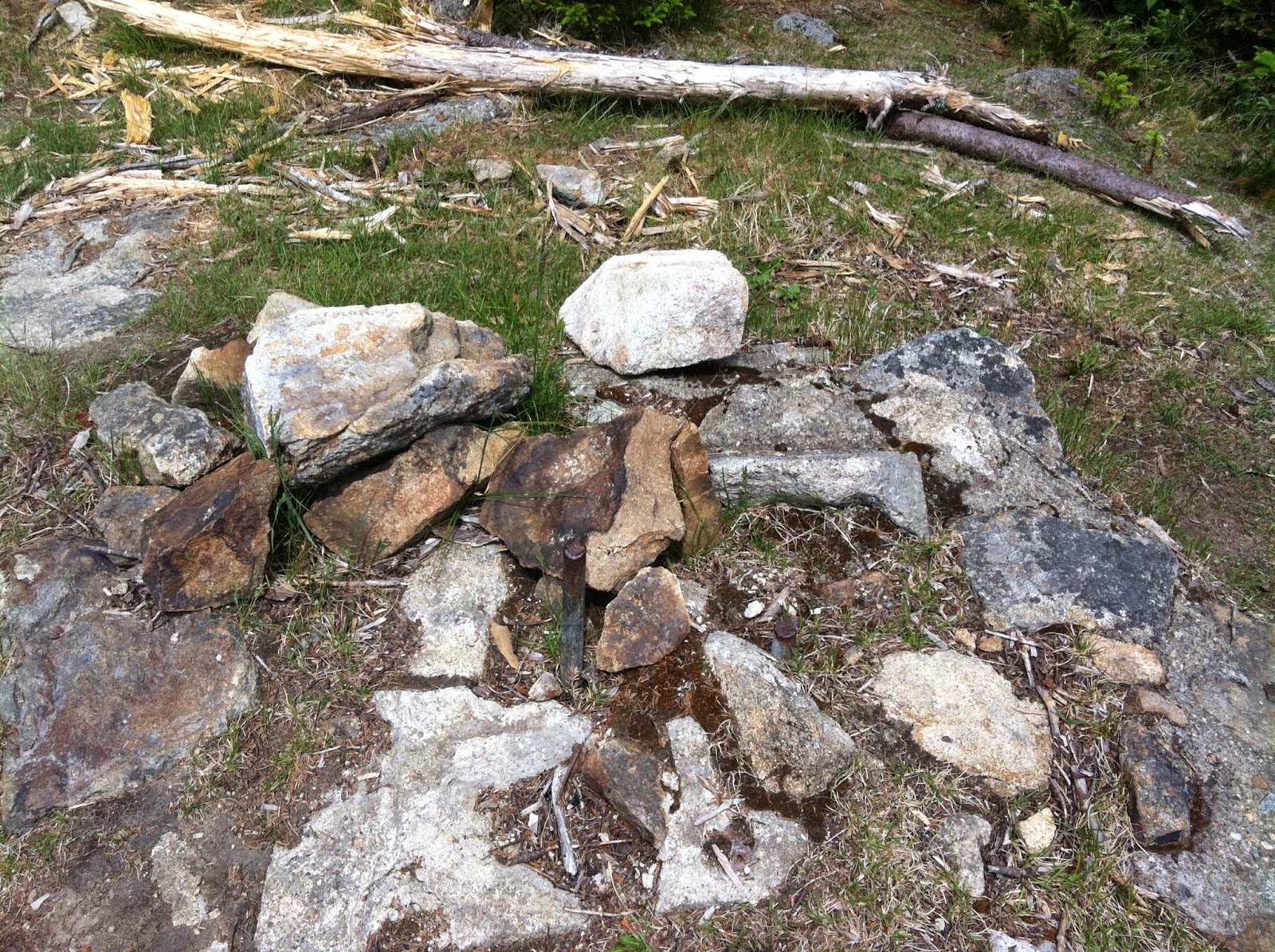 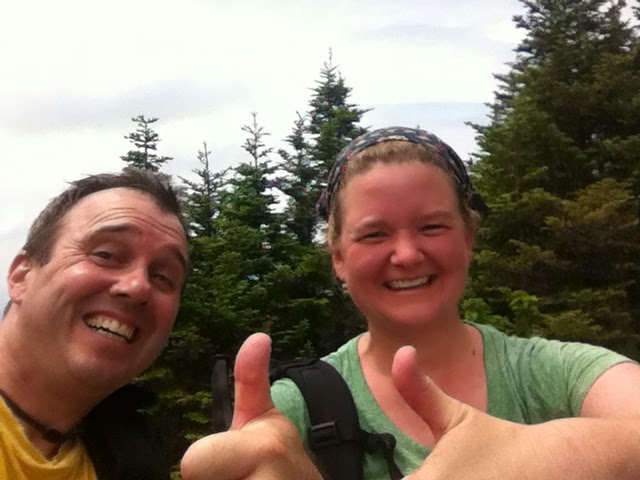 We posed for a quick summit picture and raced downhill toward Bigfoot so he could eat us, with or without napkins, and end our misery.

On the way down the mountain, Julie took a fancy to a few of the giant rocks which littered the path.

"This would look amazing on the walkway outside my house," she mused.

"What are you going to do?" I snorted. "Carry it down the mountain?" 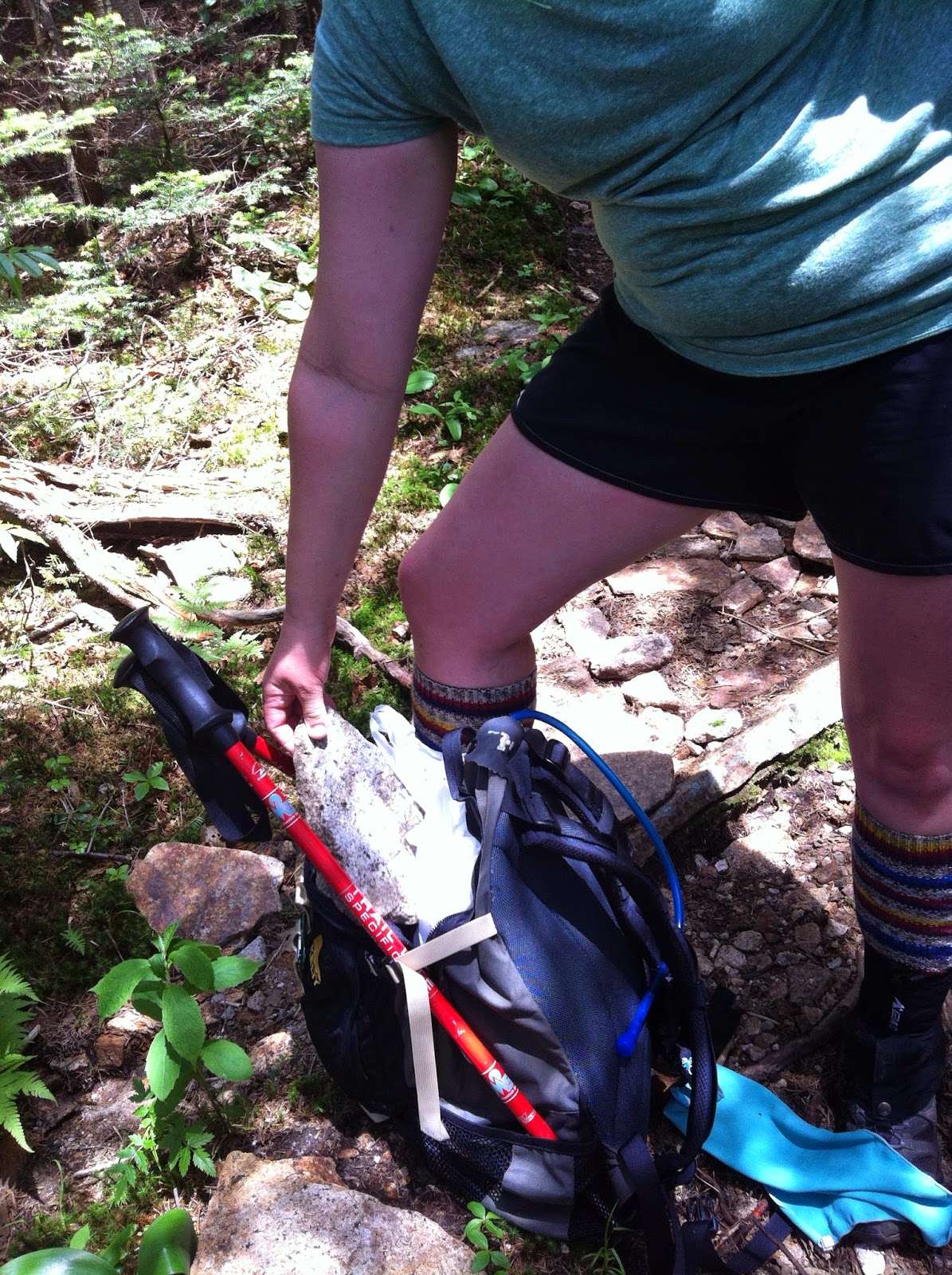 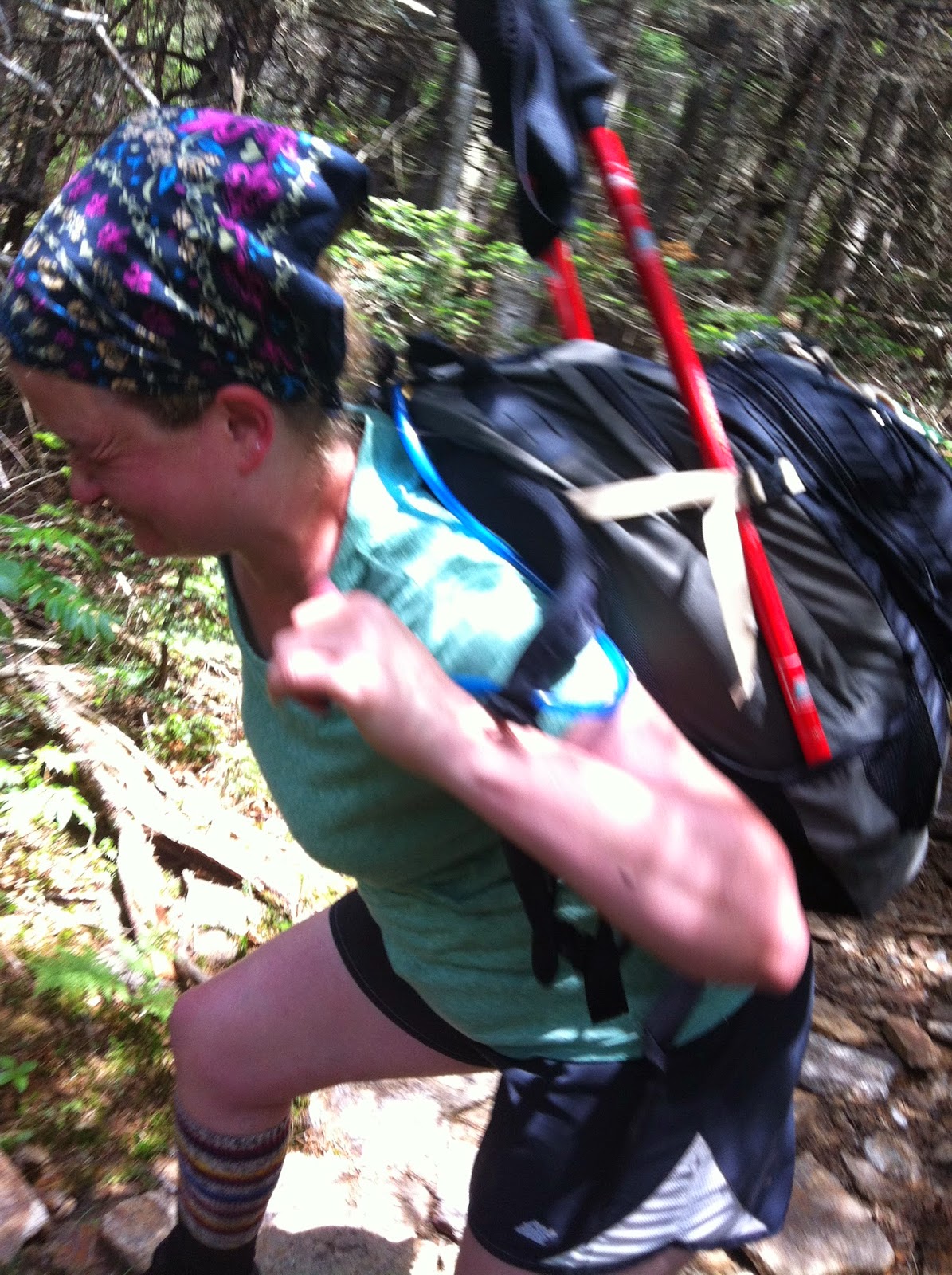 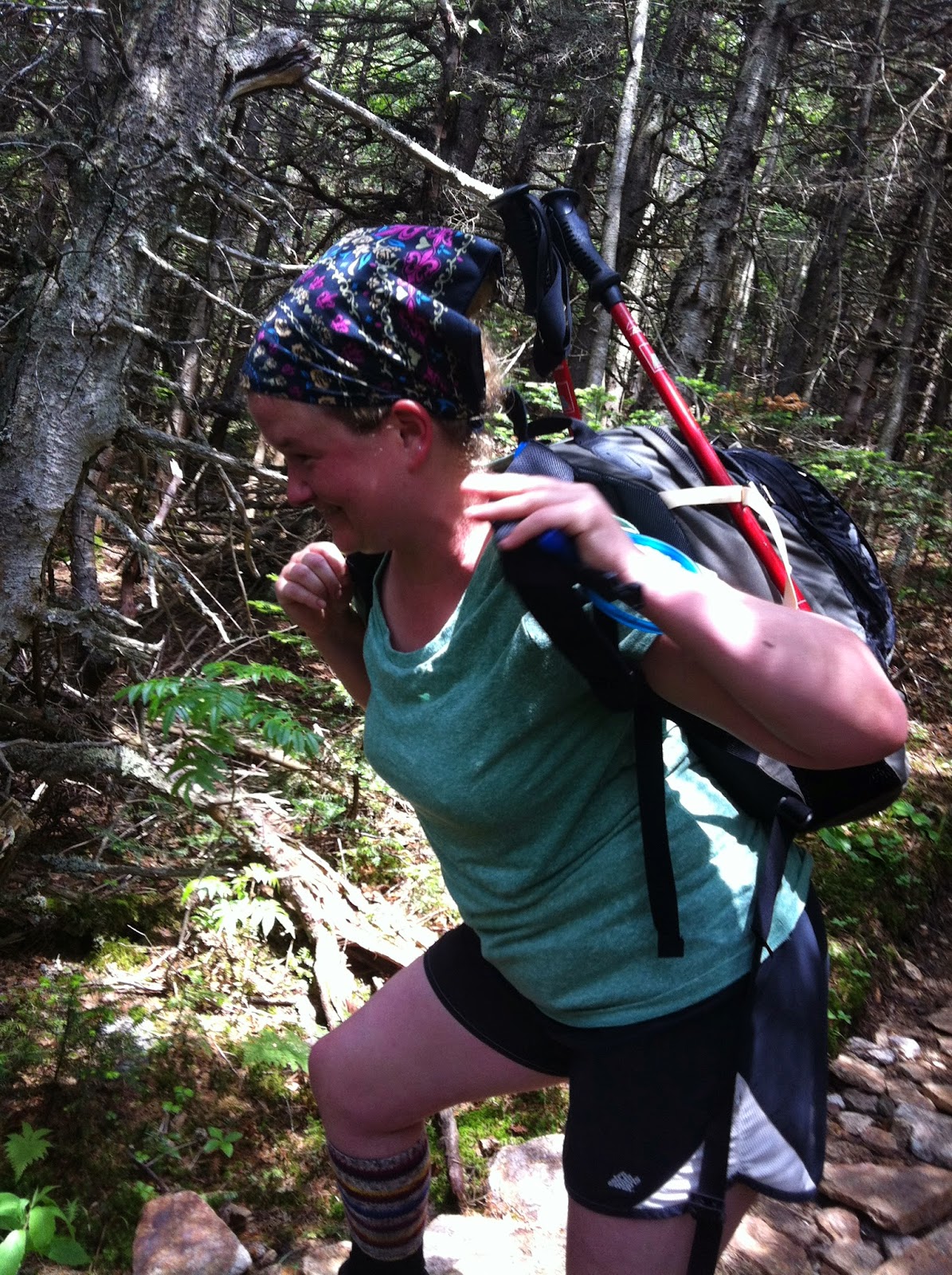 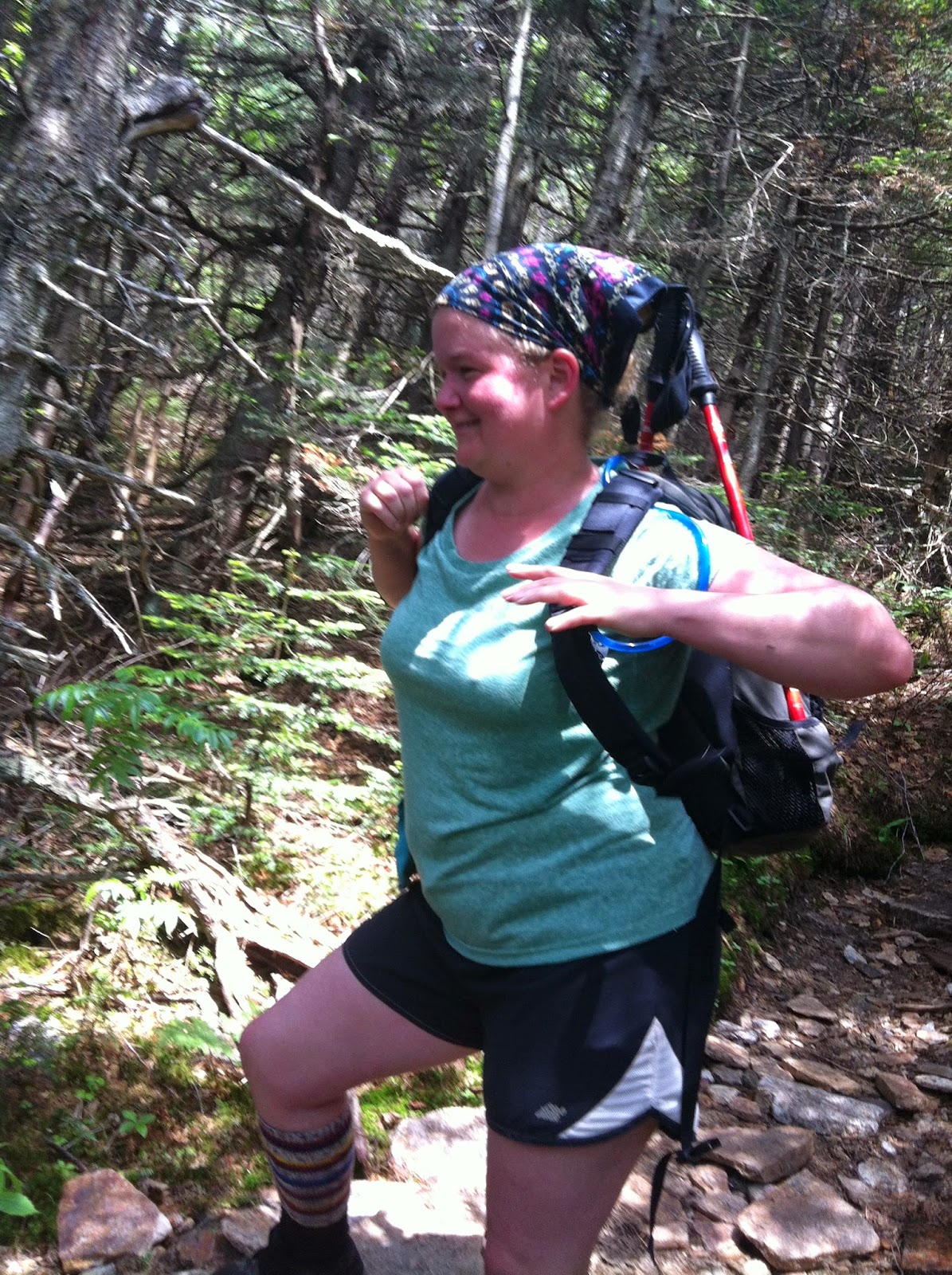 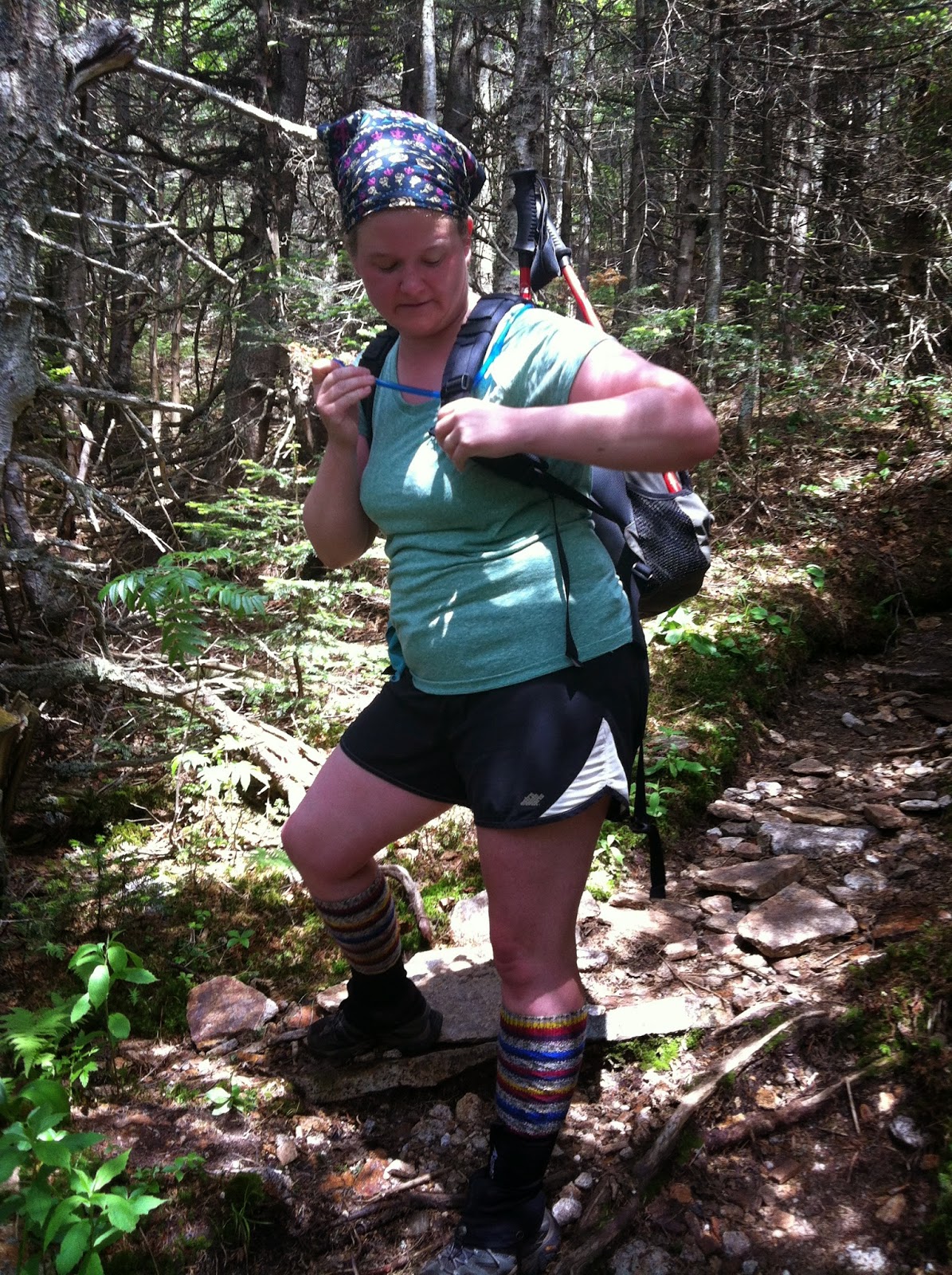 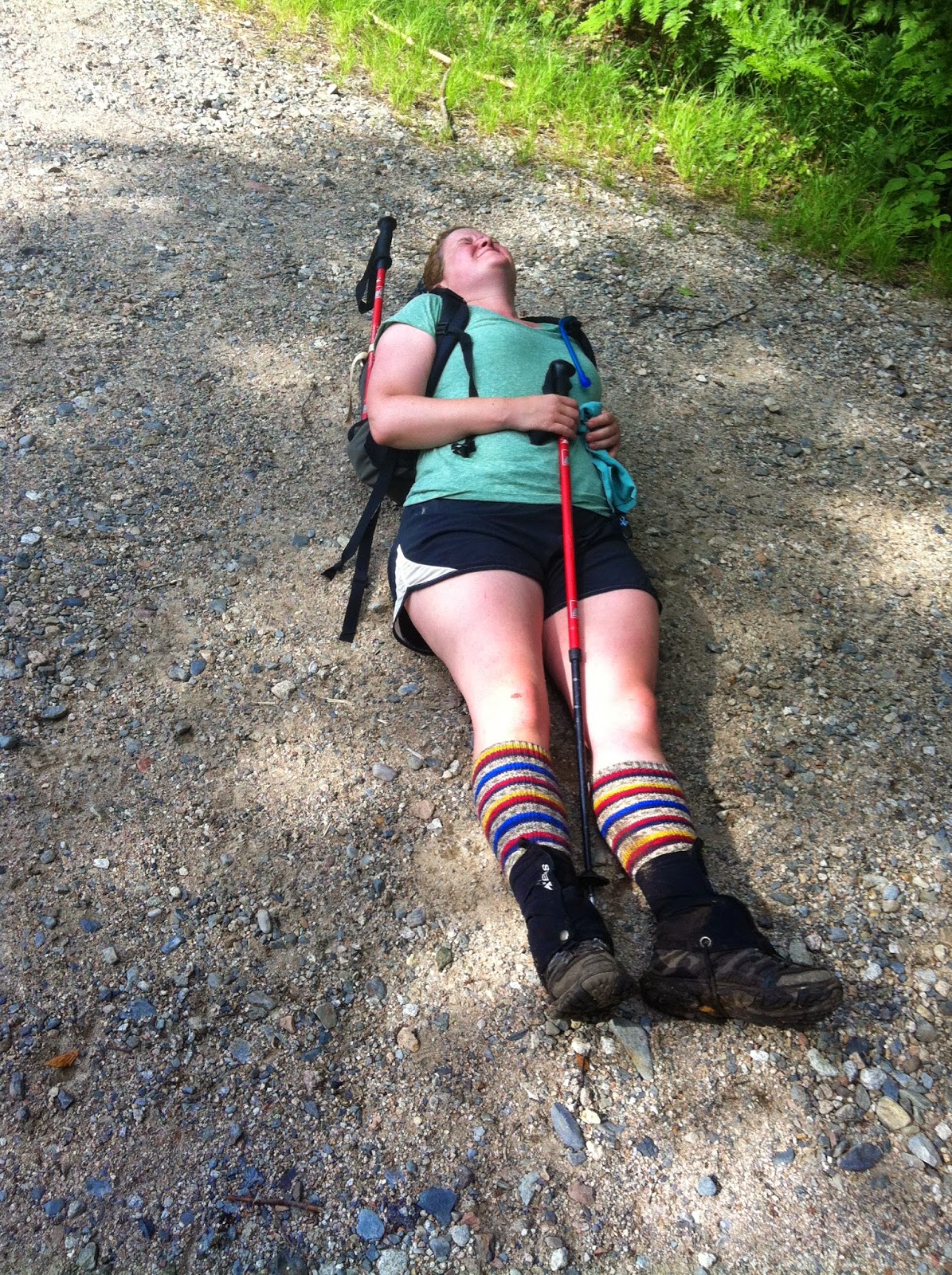 Julie did, in fact, carry the rock for a few hundred yards. Then she stopped and took off her backpack. 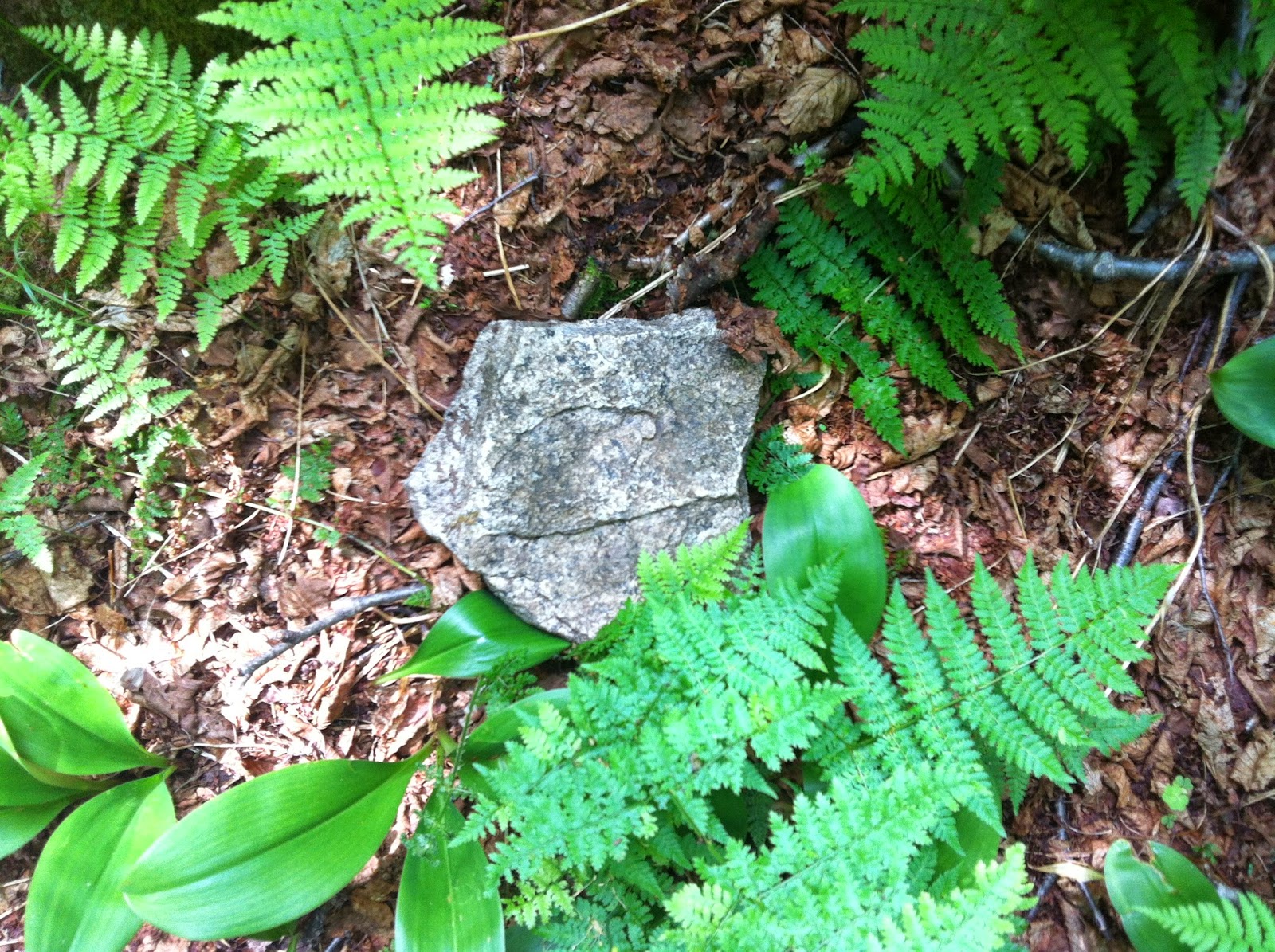 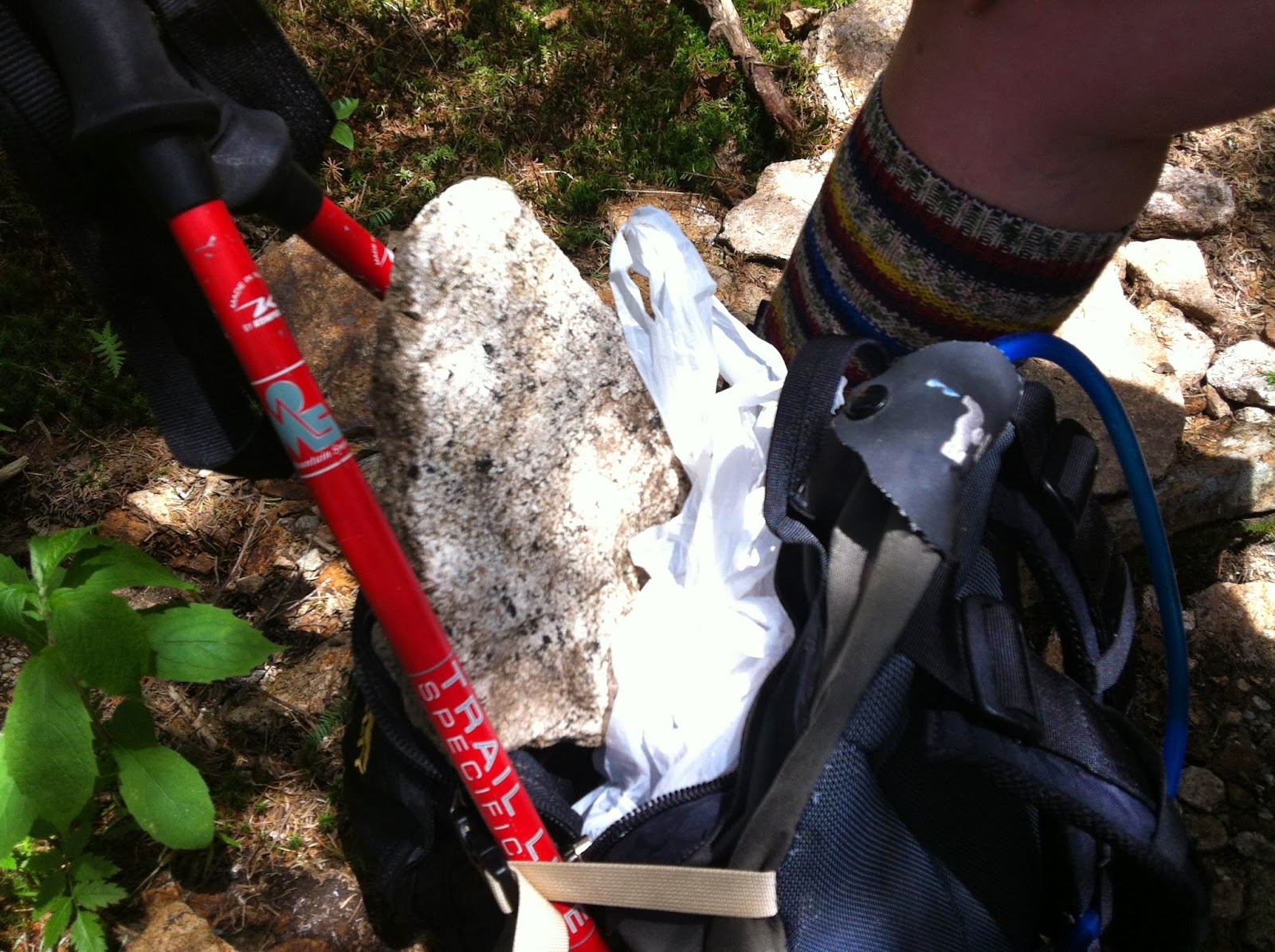 This one, too, went in Julie's backpack. Because Julie is insane.

She managed to stagger a few hundred more yards before she toppled over and her ankle made a very unpleasant snapping noise.

I sprang to her assistance and immediately started taking pictures of the beautiful view that she couldn't see because of her tears. Because I am a good friend.

Julie reluctantly abandoned her rocks WHICH HAD NOTHING TO DO WITH HER FALL and we hobbled our way through the ever thickening bugs which had gathered just to watch us sweat. They probably assumed that we were some new kind of self-marinating meal, basting in our own juices for their dining pleasure.

Julie had swallowed a few thousand milligrams of Tylenol and was completely untroubled by my constant weeping and crying. After a few hundred hours, we finally arrived back at the Trail of Tears and were on our way to Julie's swank new car so we could ruin the seats with pools of dank, mountain-based sweat. 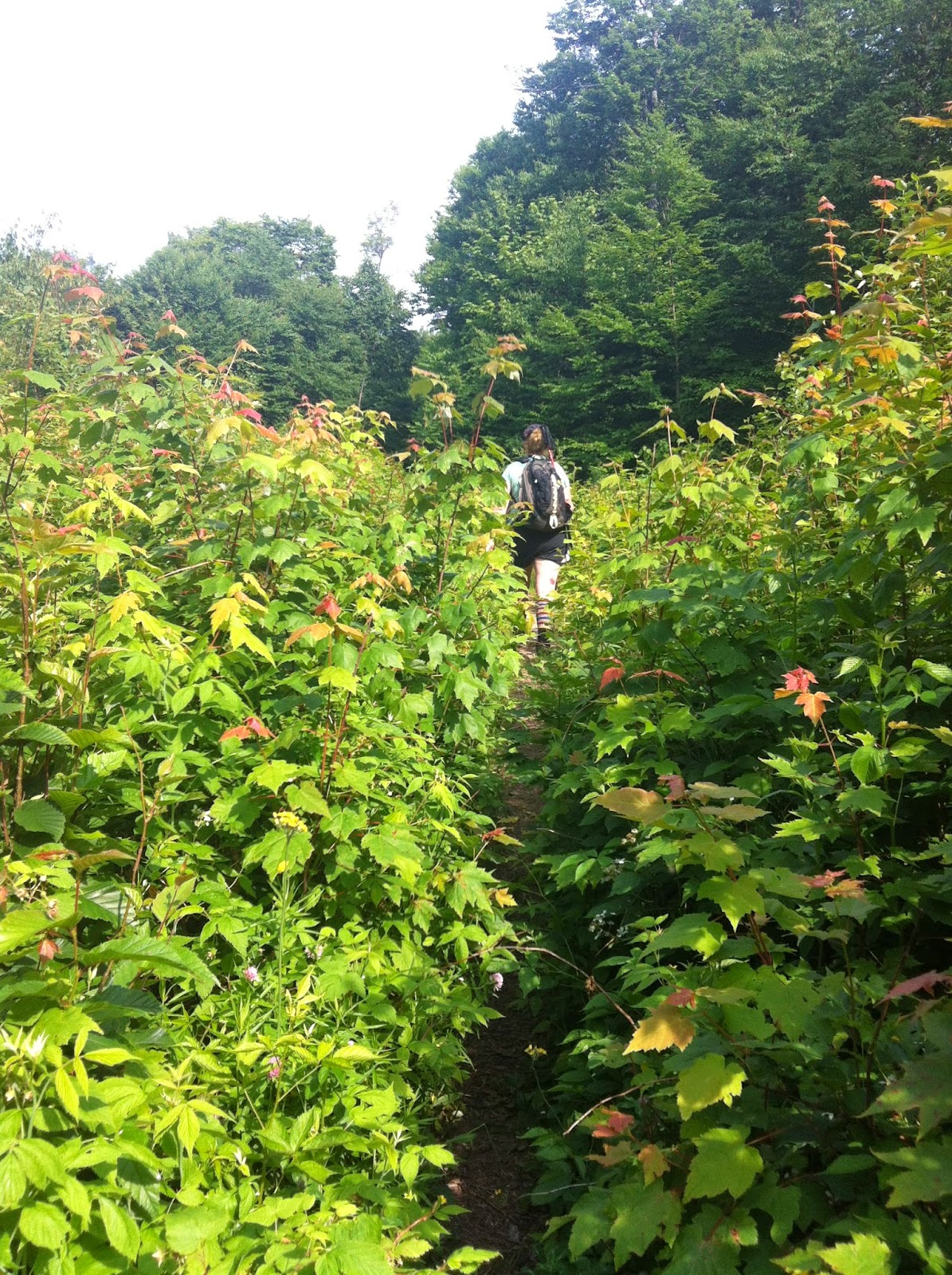 We finally arrived at the car and I celebrated by not collapsing in a heap and sobbing.


We climbed back into her car and headed toward ice cream only to find this: 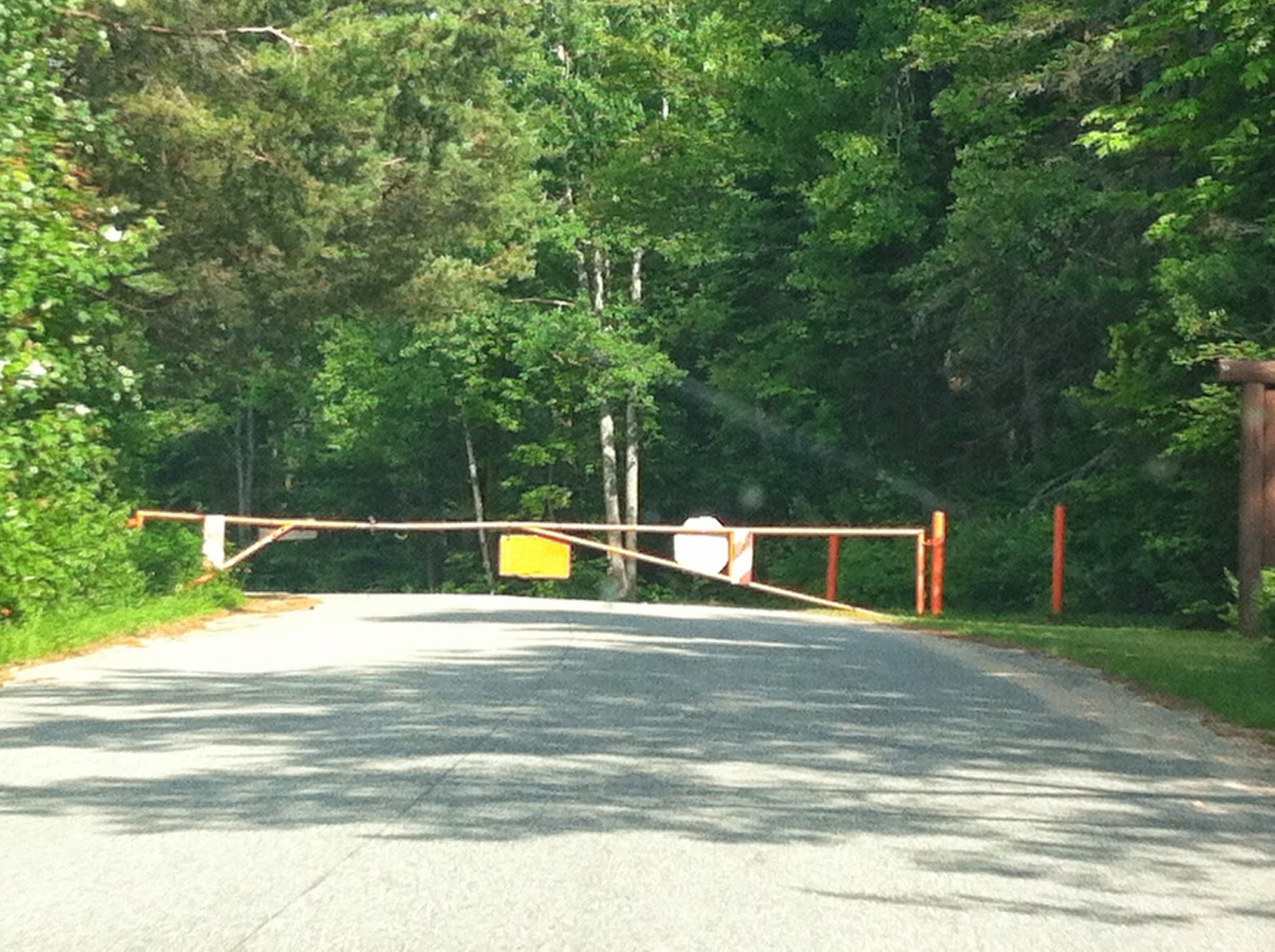 I refused to exit the car to open the gate on the grounds that I was tired and Bigfoot was no doubt still in the area.


Julie also refused to exit the car on the flimsy grounds that her ankle had swollen up to the size of a '54 Buick and was a lovely shade of eggplant and she was in excruciating pain from her fall WHICH WAS NOT CAUSED BY THE HUNDREDS OF POUNDS OF ROCKS SHE WAS ATTEMPTING TO CARRY DOWN A MOUNTAIN.


I eventually broke down and, at great risk to myself, opened the gate so we could escape.

Now, I just have to remember to pack a fly-swatter in my backpack for the next hike. Maybe I'll make Julie carry it. She can squeeze it in right next to the rocks.