So, here's a problem.
Crabs are not cute.

See?
Not cute at all.
They are not cuddly and, frankly, unless they were incorporated into the delicious splendor of Crab Rangoon, I never gave crabs much thought.
Until a few weeks ago when I was approached by an editor at Islandport Press. She was looking for an illustrator for a book about a family of crabs who go on vacation to the beach.
Because seriously, where else would crabs go? Out for Chinese food? Not likely.
My friend, Lita Judge,  passed my name along to Melissa, the editor at Islandport, suggesting, I suppose, that I seemed like the kind of guy who ate a lot of Crab Rangoon and, as a result, might be able to draw crabs very well.
The logic of it is lost on me, but somehow, my preoccupation with greasy Chinese appetizers won over the heart and mind of Melissa and I got the job.
So now I am faced with the daunting challenge of spending the next year in my studio, trying to make crabs look cute and lovable. My frequent research trips to the local Chinese food joint for Crab Rangoon have yielded little in the way of practical help in drawing crabs, but I will keep trying.
And now those snacks are tax-deductible.
My first challenge was not actually making the crabs look cute, but making the crabs work like humans. In the story, the crabs have all sorts of wacky adventures that require more of them than might be expected of your average crab. I needed to make them able to move like humans. To that end, I made the executive decision to play Darwin and evolve one set of legs off of them.
Quick marine biology lesson:
In addition to their claws, crabs have 4 sets of legs. I learned this, not from my extensive Chinese food research, but from looking at actual, unprocessed-for-consumption, crabs.
It occurred to me that eight legs would be getting in the way all the time, so I opted to create a family of rare six-legged crabs for the book.
The other immediate problem I faced–and I know this is a very species-ist, politically incorrect comment for me to make–is that crabs all look alike to me. Especially when they are looking like appetizers.
Maybe I haven't spent enough time really looking at crabs, but, if faced with a family of crabs, I would have a difficult time telling one from the other.
I assumed, perhaps rashly and selfishly, that other people might have this same trouble.
I opted to put clothes on the crabs to help readers identify which crab is which. You'd be surprised how difficult it is to make a really nice bathing suit for a crab. 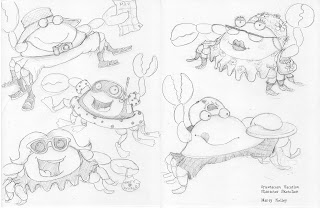 I sent these initial sketches to Melissa at Islandport and her first comment was, "You know that crabs have four sets of legs, right?"
I explained that I did know that. My response, that crabs also do not typically dress up like tourists and go on family vacations, was accurate, but held no sway with her.
The crabs could wear clothes, they could use cameras, they could purchase tacky souvenirs, but they could not have only three sets of legs. In her defense, Melissa saw the humor in this, but still did not relent.
I have since come to terms with the crabs' eight-leggedness. I still haven't been able to whole-heartedly embrace them as cute and cuddly, however.
Tasty? Yes.
Cute? Not really.
Perhaps one more tax-deductable trip to the Chinese restaurant will convince me.
Email ThisBlogThis!Share to TwitterShare to FacebookShare to Pinterest
1 comments

My Boogers and Farts Got Censored. But Not My Underpants.

I was recently asked if I'd be willing to submit myself to the grueling ordeal of answering 5 questions for a regular weekly newspaper column called...
Are you ready?

Of course, I was delighted to have the opportunity to expose myself (figuratively) to the many thousands of people who read the New Hampshire Sunday News.

Nancy, the reporter who writes the column, further delighted me by letting me know that she had actually read about the tattoo contest I'm running here on my blog. While she wasn't actually ready to have me inked into her skin permanently, she did tell me that an ex-boyfriend of hers has a tattoo of her, complete with horns, tail, and––most alarmingly–skis. I am still waiting for someone to get a Marty Kelley tattoo, but I have faith that it will happen some day. If not, I'll check in with Nancy's ex.

Nancy went on delighting me by sending me 5 questions which went far beyond the normal "Where do you get your ideas?" sort of interrogation that I am frequently subjected to. She wanted to get to the very heart of what I do. She understood the essence of my work. The first 4 questions were fine and entertaining and well thought out, but it was question 5 that really got me.


"Why do kids find boogers so funny?"

I've spent years picking my nose, searching for an answer to this question, waiting and waiting for some brave soul to ask. I was ready. I answered:


"It’s not just kids. I still think boogers are hilarious. I’m also a huge fan of farts and underpants. I think for kids, they get a sort of subversive thrill out of reading about things that are generally not mentioned in polite conversation. I have run into lots of people who frown on this idea of employing crude humor in children’s books. The fact is, kids love it. The books are for the kids. If they love it, they will read it. Everyone needs to read and if all it takes is a booger to get a kid to enjoy reading, I’m happy to oblige.
And, really, let’s face it; boogers are funny."

I'm sure you'll agree that I was absolutely brilliant there. Well thought out, eloquent, intelligent, and crammed with gratuitous uses of the word "booger".

I sent it off to her, she thanked me, and we both went about our business, satisfied with a job well done.

Several weeks later, I actually saw the article, thanks to alert parents who regularly scan the police blotter looking for any mention of me. I glanced at the article and realized immediately that something was wrong.

No, it's not the picture. that's what I really look like, smart-guy. Look at the last question.
Carefully. 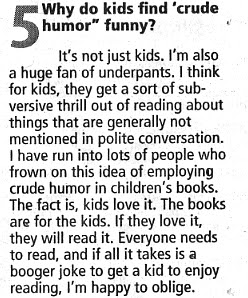 Do you see a problem?
No. Not the weird punctuation around the words crude humor in the question.
The boogers?
Where are the boogers?
One measly booger? Where are the farts?

And why in the world did they change my sentence to read, "I'm also a huge fan of underpants."? Without the booger/fart context, it makes me look like some kind of weirdo who gets his jollies with undies. Like I have a collection of underpants or some strange fascination with boxers or something.

I mentioned this to Nancy in an email and she explained that it was her editor's heavy hand that made me look like an underpants freak, not hers. The NH Sunday News is known for having a rather strong right-wing bias, but I strongly suspect that Republicans wear underpants, too. Sensible, navy blue ones, no doubt.

If I ever do find out who her editor is, I'll march right into his office and tell him a thing or two.

As soon as I finish arranging, dusting, and waxing my underpants collection.
Email ThisBlogThis!Share to TwitterShare to FacebookShare to Pinterest
0 comments