Yet Another New Portrait 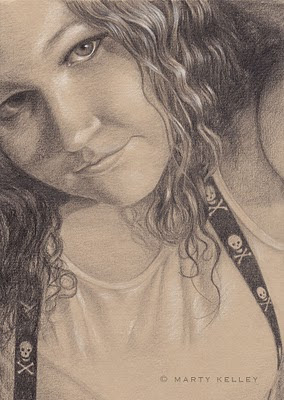 I know...
I know...
I'm like a portrait machine, huh?
This is 12" x 9", graphite and chalk on toned pastel paper.
I'm thinking it would be cool to do a bunch of portraits like this, from self-portraits posted online.
I could call it "Hey! Look At Me!"
Email ThisBlogThis!Share to TwitterShare to FacebookShare to Pinterest
1 comments

Another Year of Low Level Animosity Directed at My Best Friends

Let us begin with a picture. 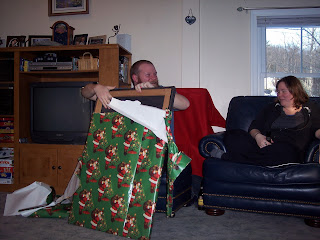 It is a deceptive picture. What appears to be a happy, heart-warming scene of Christmas gift giving joy is actually the opening salvo in this year's annual Gift Swap of Horror.

It would be smart to include a brief history lesson at this point; but I did that last year and I'm not going to rewrite the whole thing. You should click here to read about the history of the Gift Swap of Horror.

Be sure to come back here though, because otherwise you'll miss out on how this year's swap included gunfire and 7 layer Mexican dip that may have only had 6 layers.

Tim and Katie, pictured above in the scant few seconds before the enormity of their fate was made clear to them, have long held an annual Laser Tag game in the week between Christmas and New Year. The invitations always point to the fact that you will have the opportunity to shoot your loved ones in a festive, jolly fashion without all the messy legal wrangling that holiday family shootings usually involve. It also gives everyone an opportunity to run around in a dark arena and work up a healthy holiday sweat while mindlessly shooting at children. It is incredibly enticing immediately after the holidays.

This year, the Laser Tag shootout was postponed a bit. Through serendipitous happenstance, we were able to shamelessly piggyback the Gift Swap of Horror on to the same day as the Laser Tag. We played Laser Tag, then we gathered for The Swap.

My wish, in retrospect, is that the order of events could have been reversed. After the Gift Swap, there was much more animosity stewing within us that could have used venting. And more importantly, after the Laser Tag, there was much more locker room aroma clinging to us that could have used venting. We masked the odor of our stinky selves with 6 or 7 Layer Mexican Dip (I couldn't get a clear layer count) and soldiered on with The Swap, however.

We are seasoned Gift Swappers, battle hardened from 13 years of bestowing unimaginable eyesores on one another. After what seemed to be a sufficient time milling around the kitchen, grazing on snacks and slurping brain-lubricating liquids, we all trudged warily into the living room where the gifts waited.

The gifts almost looked welcoming and enticing in their festive wrappings. We drew names with the solemnity due to the occasion and then the horror began in full.

First up were Tim and Katie. If you visit them at any point in the next twelve months, be sure to take a tour of their bedroom and look for this treat, which we predict will look amazing over their bed. 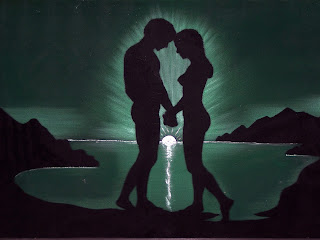 In fact, there is some speculation that the couple in the picture is actually Tim & Katie on their recent honeymoon.
You decide. 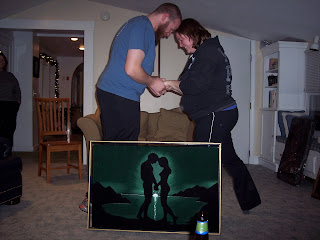 Ben was delighted that his gift included a convenient, beat-up carrying case so he can bring his gift with him wherever he goes. 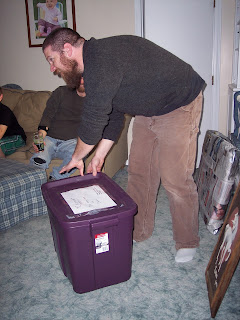 And he most certainly WILL bring it with him wherever he goes, as soon as he figures out what the heck it is. 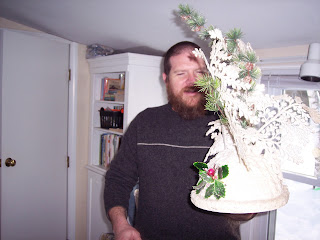 Not clearly visible in the picture are the three-inch, lethal steel spikes protruding at random angles from this thing. Those spikes made it clear to Ben that he had been given a most rare treat in The Swap. A wearable piece of art. He doesn't even need that carrying case. 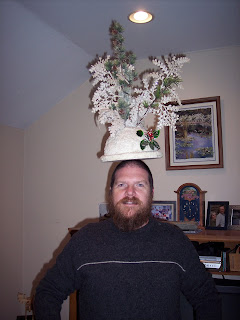 The age of this crumbing beauty pretty much guarantees that the glittery white filaments raining down on Ben's head are asbestos.
Or lead.
Or both.


Julie and Scott were amazed and awed by the surreal beauty and transcendent, sublime loveliness of the art which will be blessing their home for the next year. 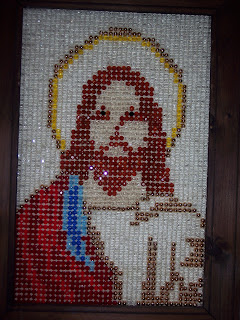 A genuine, rapturous glow shone in through the windows as they bathed in the splendor of their gift. 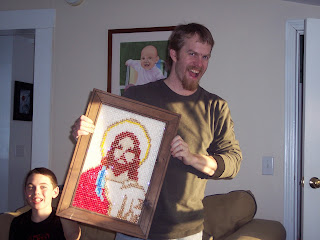 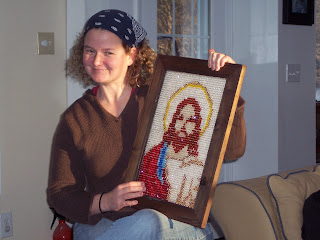 If they ever find the mental patient who glued all those individual beads down to create this masterpiece, I'm certain that they will prostrate themselves at his feet, thanking him endlessly for the joy he brought into their lives.

Kerri and I had the terrible misfortune of drawing Ben's name this year. Ben's wife, Ann was unable to attend this year's swap. Ben claims that it was a sinus infection, but I am of the opinion that she simply didn't want to have to face whichever friend was saddled with this for the next year. 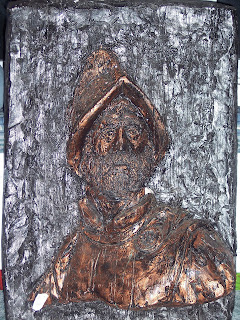 If I could offer a good description of it, I would. It is giant. It is made of some sort of cast material; possibly the same crushed asbestos that Ben's gift is made from. It weighs at least 50 pounds.
You can see for yourself how delighted I was when I unwrapped it and herniated myself lifting it. 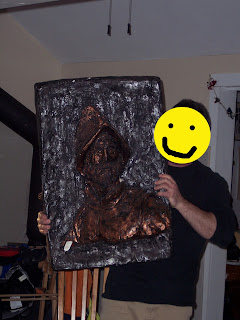 Ben offered the suggestion that I might want to sink a giant lag bolt into a stud behind the wall for hanging. "Make sure you get it on a stud," he warned.

I'm considering hanging it outside. I may be able to turn my yard into a sort of Magellan Museum, complete with a hideous cast bust of Magellan and nothing more.

I'm certain my neighbors will love it as much as I do.
Email ThisBlogThis!Share to TwitterShare to FacebookShare to Pinterest
0 comments


We were just sitting down to a delicious dinner (homemade soup with crunchy homemade sourdough bread, should you be curious) when the phone rang.
"Let the machine get it," I mumbled, soup dribbling down my chin and on to my lap.
Conversation ceased at the table as we listened to the answering machine, curious about who would be so bold as to interrupt our tasty dinner.
"Hey Marty. It's Steve. So, I'm wondering... What would you be willing to do for $112.50?"
I excused myself from the table, soup still dribbling from my lips, and raced to the phone.
The question really is, "What would I NOT do for $112.50?"
It was actually the precise amount, including that provocative fifty cents that intrigued me so much.
If Steve had asked "What would you do for a hundred bucks?" I probably would have finished my soup before returning his call.
But $112.50?
An amount like that warrants immediate and undivided attention.
As it turned out, Steve was inviting me to participate in a performance he had booked.
For the following afternoon.
My buddy Steve is very kind and generous about inviting me to some of the many musical extravaganzas he regularly performs. My suspicion is that he enjoys watching me squirm when, mid-performance, he turns to me and whispers, "You haven't heard this next song before because I just wrote it this morning. I haven't got all the words or the structure of the song totally worked out yet, but just play along. It'll be fine."
Steve is a hardened, grizzled veteran musician who can easily and competently operate under such conditions. I, by contrast, am a hack who occasionally plays the drums for my own personal satisfaction or to annoy my neighbors.
The gut-wrenching panic I feel during these moments on stage with Steve is generally its own reward.
But now he was offering $112.50!
With only one song in the entire set that I had never played before, the performance was much easier and less stressful than normal.
But that's because Steve was using the performance as a clever ploy.
He had asked me to arrive at his house a few hours before the performance because he had a new song that he was working on and wanted me to play the drums for him.
At the recording studio.
In two days.
A song I've never heard before? At the studio? In two days?
No problem.
We sat in Steve's living room and he went over the song, stressing the fact that it was going to have a sort of Bo Diddly kind of feel to it. Rock and roll with a chunky sort of back-beat.
No problem.
We practiced it a few times and it seemed to go well, which really should have served as a sort of early warning to me.
I dutifully arrived at the studio at the appointed hour, expecting a fun-filled afternoon of pain, suffering, and humiliation.
Possibly followed by pizza.
As it turns out, there was no pizza, but the pain, suffering, and humiliation I had expected were nothing compared to what I actually experienced.
Steve breezed into the studio and cheerily announced, "So, I've been rethinking this song and I think it may be better if we forget about the Bo Diddly thing and go with a reggae sort of feel. What do you think?"
"Did you bring Jamaican rum?" I asked.
Steve chuckled warmly and ignored my plea, evidently imagining that I was joking.
Steve played his new reggae version of the song and I tried valiantly to think of WWBMD?
What Would Bob Marley Do?
Of course, the answer to that is obvious, but was entirely out of the question.
I've never been particularly proficient at playing island beats on the drum set.
I trudged into the recording room and spent the entire afternoon proving that fact to everyone at the studio including the unprecedented tour group that wandered through the studio at the very apex of my suffering.
Seriously.
A tour group.
"What's that whimpering heap over there in the corner?" asked one of the people.
"Oh, that? That's just a drummer. He'll be fine." came the answer before the tour wandered away.
Six and a half hours after we had arrived, my 3 minutes and 30 seconds of drumming was all recorded.
I woke Steve up from where he was having a restful nap on the studio's luxurious leather couch, and we made our way homeward.
Next time, I'll think very carefully about what I might be willing to do for $112.50.
And then I'll pick up the phone anyway.

(The video is actually from a previous recording session with Steve. I couldn't bear to share the pain of this most recent one.)
Email ThisBlogThis!Share to TwitterShare to FacebookShare to Pinterest
0 comments