This whole rock and roll lifestyle thing isn't all glitter and glamor and unbridled debauchery.

Sometimes there is also pizza.

Last Saturday we had our second big show at Tupelo Music Hall. It was a noon show and we were scheduled to begin loading in and setting up equipment at 10 a.m., so naturally I went to bed nice and early Friday night and slept for almost 30 seconds before my wife developed some sort of Exorcist-style stomach bug that had her spectacularly sick for the rest of the night.

At 8:30, well rested from a night of tending to my sick wife, I loaded all my drums into my rock-n-roll, heavy metal Toyota Camry and headed to the show.

Setting up for a show is easy if you're a bassist like Joe. You stroll in with a bass and an amp, plug in and you're all set.

Being a drummer requires lugging endless loads of heavy equipment all over the place, setting it up, adjusting it, fixing it, and then hitting each drum 6,000 times so the sound guy can make sure that each thump of the bass drum is loud enough to make people in the front row lose control of their bladders.

Personally, I don't enjoy all that lugging and setting up stuff. It reminds me too much of work. So, rather than spend my valuable time doing my own work, I grabbed Noelle's daughter, Isabelle and asked her if she was interested in a high profile career in the music business as a roadie. I talked it up and explained that being a roadie is sort of a short cut to fame and fortune. "Beyonce was a roadie for Iron Maiden," I explained. "And look at her now."

Isabelle was thrilled with the opportunity I was affording her. In an effort to help her gain some valuable life-experience, I allowed her to haul all my equipment from my car and set it all up for me. Because I care about children.

After Isabelle finally got my drums set up the way I like them she told Noelle that she didn't want to be a rock star anymore. She explained that she wanted to be something fun and exciting. Like an accountant. Noelle, naturally, was heartbroken.


Soon, the doors opened and people started filing in. That's when Steve announced that he had a few new songs that we had never played before that he had added to the set list. I was unfazed, as Steve does this at every show. Joe didn't even hear Steve's announcement, because he was slurping his coffee. Plus, he's so good, he can play new material while slurping coffee.

Noelle didn't hear Steve either, as she was still wallowing in self-pity that her daughter has decided to chuck the steady life of a roadie for something as frivolous as being an accountant.

We spend the next 20 minutes milling around on stage watching Joe drink coffee as the audience filled the place.

Then, it was showtime.

To look like awesome professionals, we walked backstage (actually a small closet, located directly to the side of the stage and fully visible to the audience) and strode onstage in true, dramatic rock star fashion: tripping over cables and hissing "What song are we starting with again?"


Then we started to rock.


It was a pretty full house and we did have fun. 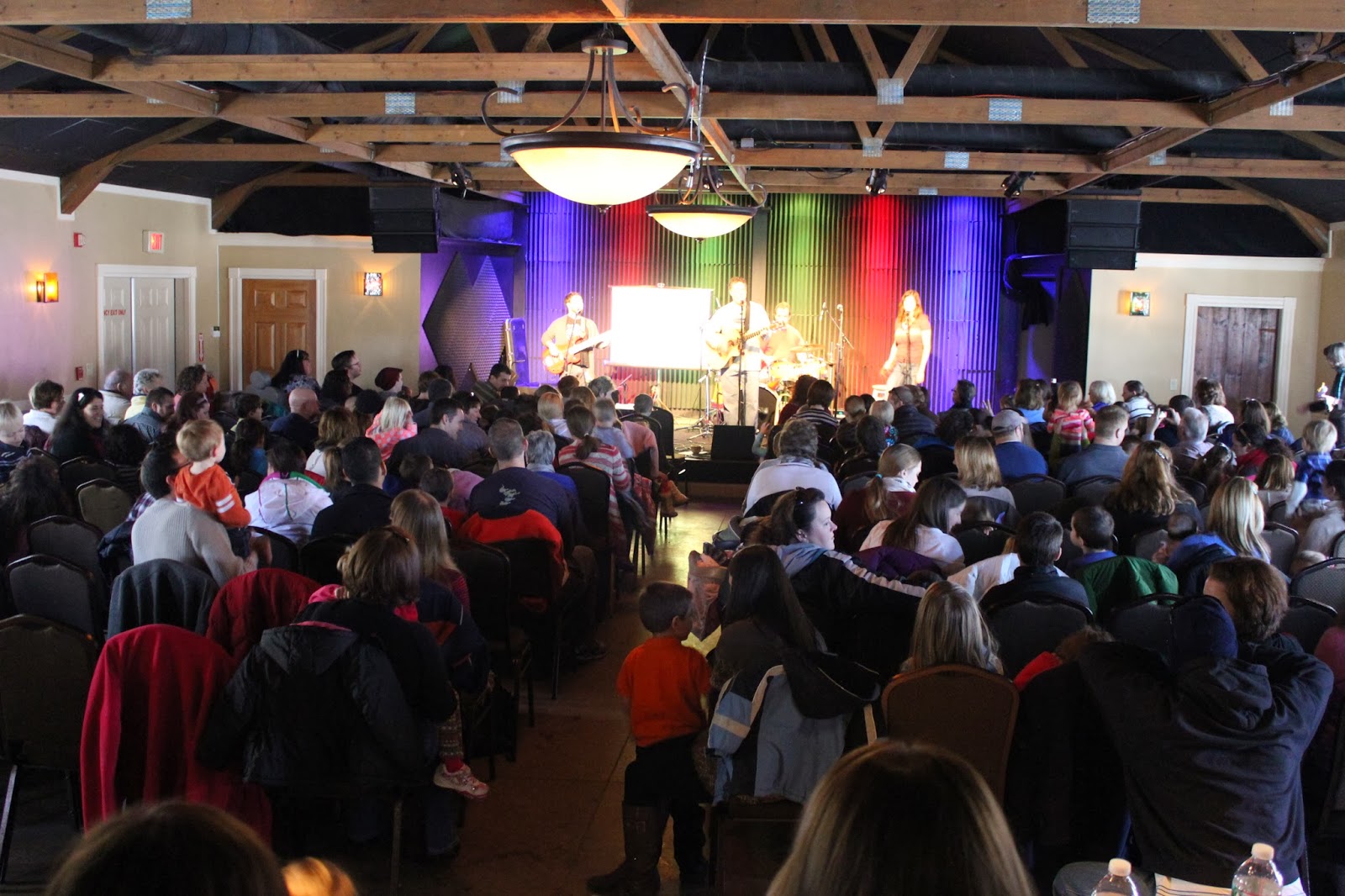 The Grand Finale of the show was the much anticipated dueling ukulele version of Steve's song, "I Love Ukulele". I sat behind my set, giddy with the promise of fire and explosions in this ukulele death match. 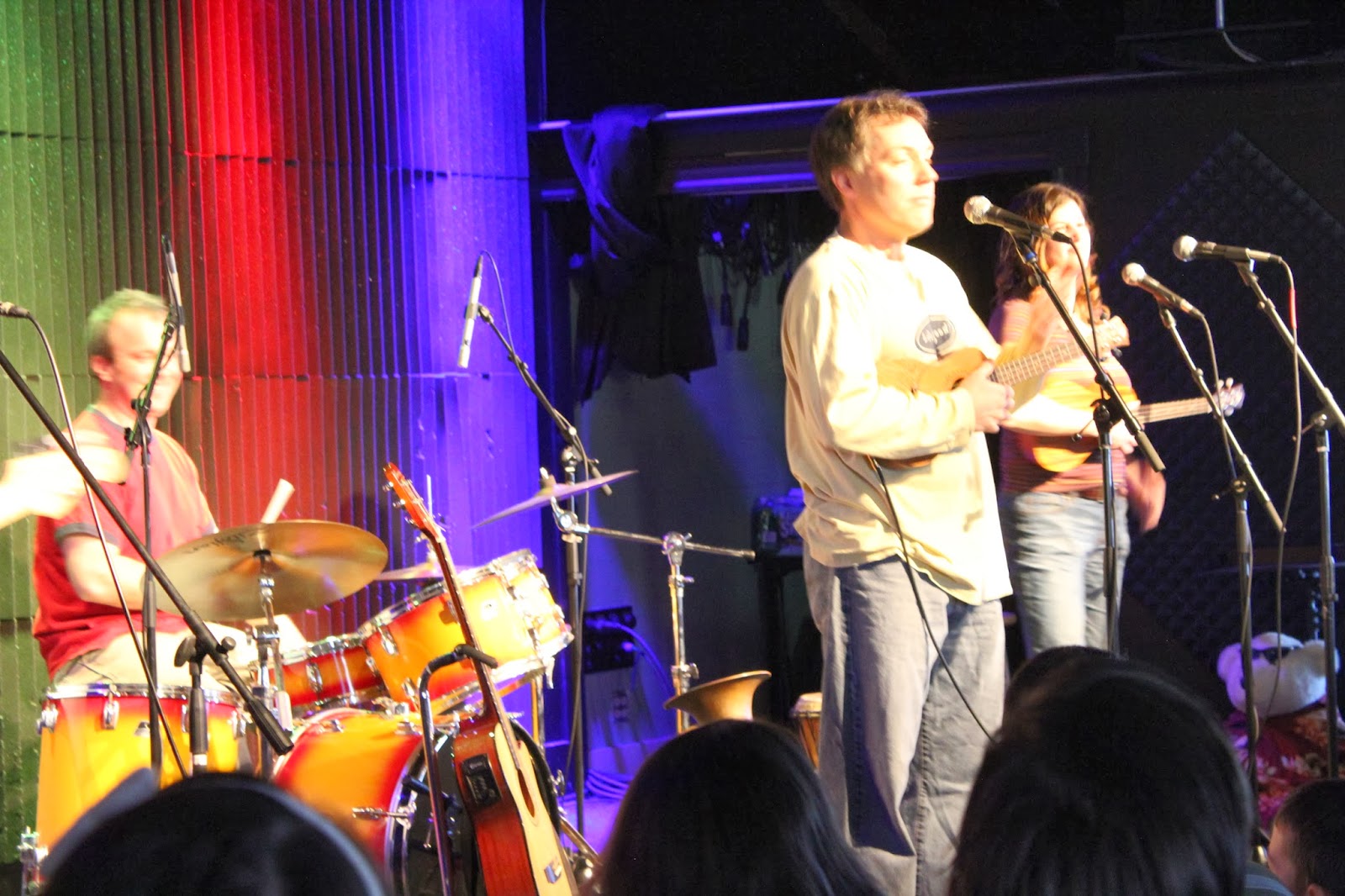 I was slightly disappointed that the promised pyrotechnics didn't happen, but it was probably a wise decision, given the flammable nature of small children. If any of the kids in the audience had been engulfed in flames and run onstage, it could have ruined some of our equipment.

I took a moment during the show to snap a few quick pictures to show you the awesome view from onstage. 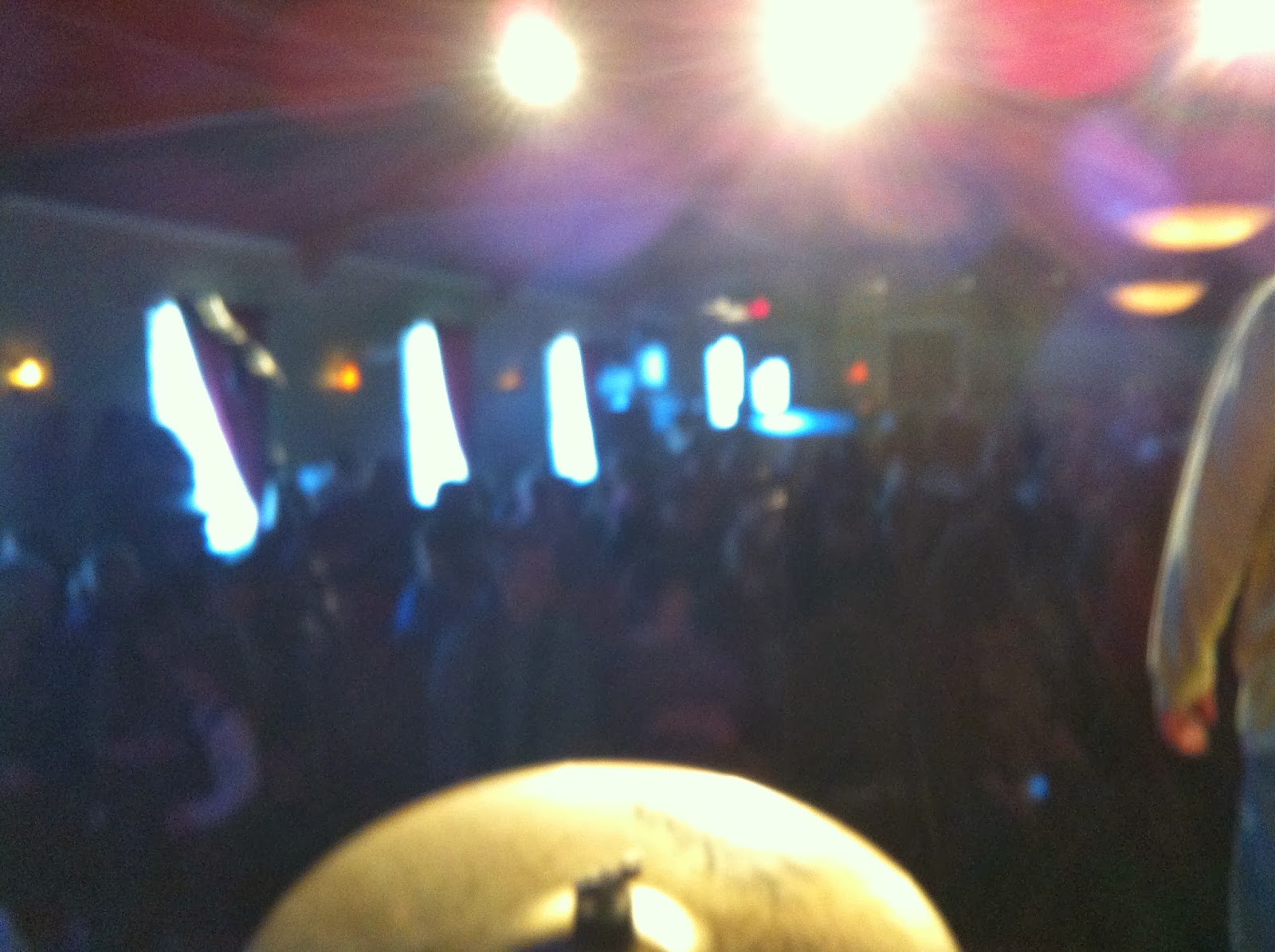 After the show, we hustled out back and were swamped by throngs of fans, clamoring to buy stuff from us. 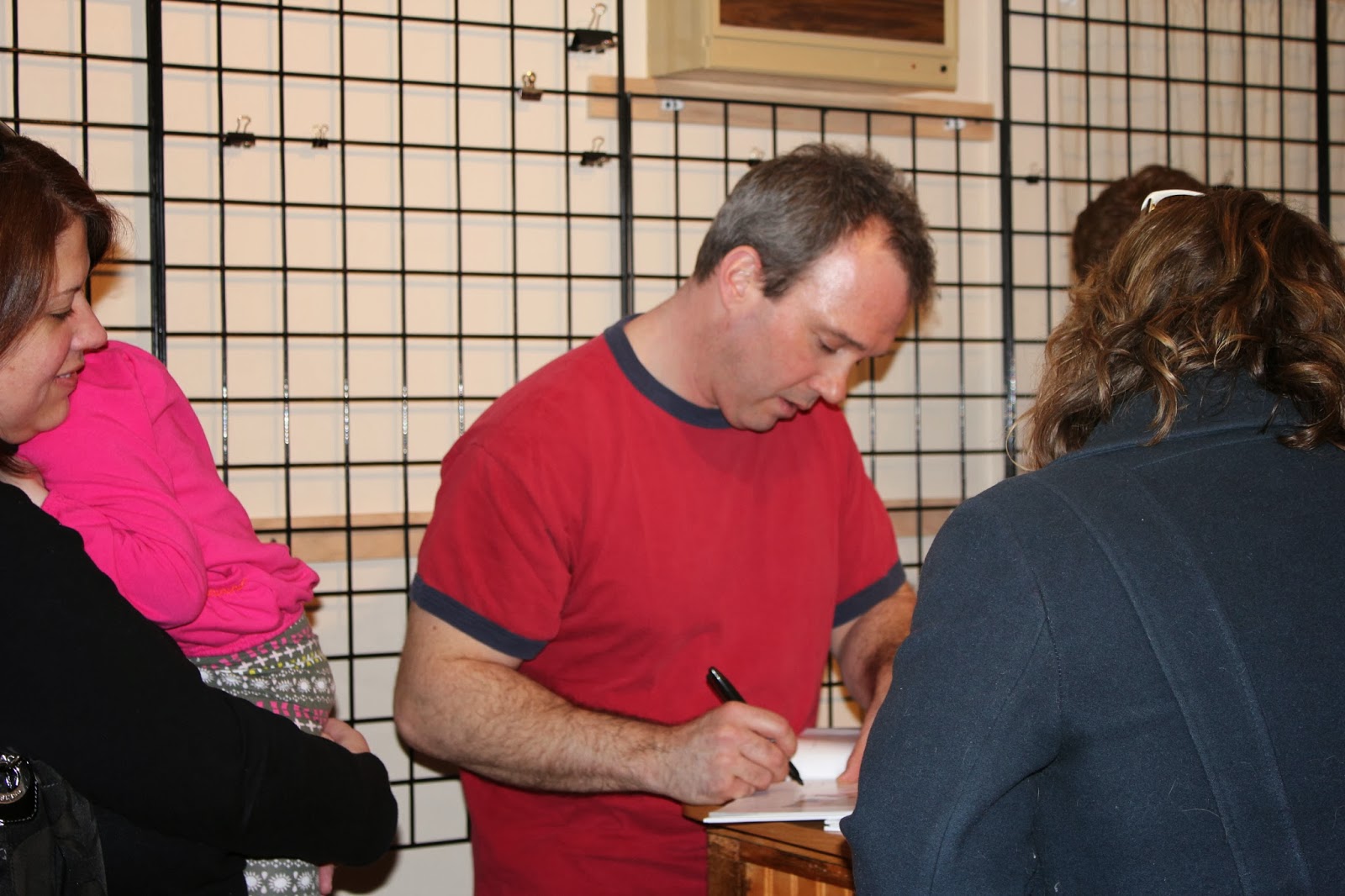 I signed books slowly to give Isabelle plenty of time to break down my equipment and load it into my car for me. She's only ten, after all.

Once the equipment was all packed up, we headed out for pizza. Steve and Joe ruined the meal for everyone by ordering a pizza with anchovies, green olives, and onion. The waitress actually made gagging noises when they ordered it.

I was going to take a picture of it, but the noxious fumes wafting around it like a miasma made it difficult to focus. We suggested that they might like to eat it outside, but they declined. Steve's wife, Sheila sat next to him for the meal and was a delicate shade of green by the end of the meal.

When we were finished eating, I headed home to wash the stink of anchovies off me and bask in the glow of rock and roll fame. And to explain to my kids that unloading my stuff from the car is the pathway to fame and fortune.


(Click here to see a short video that our good friend, Laura made at the show.)