Even Less Fun Than It Appears

Here is how it went:

Kerri: What was... Holy [slightly less foul word, because she is a lady]!!

Me: [Piteous moaning, punctuated by repetition of the same word, but with less passion and volume.]

Kerri: Are you okay?

Me: I think so. I can still feel my toes. They hurt. So do my knees. And my butt. Does the ceiling look really bad?

Kerri: It doesn't look as good as it did before. Are you sure you're okay?

Me: It's only an assumption at this point, but aside from the incredible pain and the blood seeping through my pants, I appear to be okay.

Kerri: Then, can I take a picture?

Me: [More moaning, a few more oaths and foul words.] Yeah. I guess. This will probably be funny later. I'm glad I wore pants today.


My generous neighbor–whom I now hate–gave us 100 square feet of very nice hardwood flooring that she had leftover from a job at her house. So, I had to install it. The only place that seemed reasonable, and was under 100 square feet, was in the upstairs hallway of our 200 year old house where nothing ever goes smoothly or without bloodshed.


Naturally, this simple flooring project evolved into an elaborate horror show of ripping up old flooring and then, in a surprise turn of events, slipping on the nail-studded exposed floor joists and falling through the ceiling in a hilariously painful manner. I didn't go all the way through thanks to a strategically placed stud that allowed me to break my fall with my crotch.

See how hilarious my knee looks?


So far, the free flooring my neighbor–whom I used to like a lot–gave us, has cost us over $250 in materials, not including medical supplies. And we're just getting started.

Next time, she can keep her left-overs.

Come on. Gather 'round and I'll tell you a story. A story full of intrigue, excitement,  full body searches, and lightly salted peanuts.

A long, long time ago, my buddy, the author and illustrator Dave Biedrzycki (pronounced "Smith"), sent me a top secret email that contained email addresses for some of his favorite author visit contacts. As instructed, I read the list, committed it to memory, and ate it -  which was more difficult than you might think and resulted in me having to buy a brand new computer, thank you very much, Dave.

After I got the new computer up and running, I sent out emails to those people on the list, detailing the many wonderful reasons they should have me come to their school and talk to their students about how to be an author. Just a few days later, I got an email from Donita Hughes at Grace Lutheran School in Sandy, Utah asking me to come visit.

Donita told me about their annual Author Festival and said that they'd fly me out there to talk to the students at the school.

I thought, "How cool is that? I can get one of those full body searches from the TSA that everyone seems so keen on these days. And probably some peanuts on the plane! I'm IN!"

I made my arrangements, packed my bags, and headed off to the airport. Then I remembered that I still had several months to go before the visit so I went home again.

Last Sunday, all my months of eager waiting were finally over. I headed off to the airport all atwitter with anticipation. And a small measure of dread. I haven't flown in a LONG time and I'll admit that I was a bit concerned by all the horror stories I'd heard about TSA screening. I didn't want to go through the full body scanner (Public Service Announcement: The scanners are OPTIONAL. Anyone can opt out. You don't need extra radiation in your body, people.)  and I had heard that the TSA folks made the opt-out process unpleasant.  I'm happy to report that all I did was ask to opt out, they took me around, gave me a quick, polite pat down and sent me on my way. No problem.

Once in the airport, I was free to wander around aimlessly until my flight was ready for boarding. My quick flight to Detroit was made even more delightful by two packets of complimentary "Lightly Salted Peanuts - Warning: Contains Nuts".

Detroit Airport, for those who have never had the pleasure, is a garden of earthly delights for the weary traveler. I began my adventure by traveling through the eerily green, throbbing Tunnel of Love.
I'm not certain that the airport officials actually refer to it as the Tunnel of Love, but I enjoyed it so much that I can think of it in no other terms. The lights along the tunnel changed color in time to the music thumping through the speakers. If not for my dedication to my job, I may have skipped Utah entirely and spent 3 days sitting in the tunnel, lost in its transcendent beauty.

But I had a duty to uphold and a school to visit, so I forged onward to the next terminal so I could find my gate. Rising from the tunnel, I beheld... 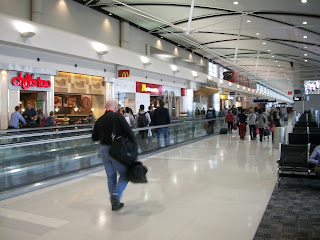 At least, I assumed it was a mall. It had all the mall requirements: fast food, stores full of overpriced stuff, and hoards of people wandering aimlessly, staring at their phones. I was distressed by this until I saw a flash of red zip past over head. See it in the picture? Look closely. That's right. A little train zips endlessly back and forth, back and forth, back and forth high above the heads of the ordinary peasants forced to labor on their own two legs.

With several hours until my flight, guess who spent quite some time riding back and forth on the train?


Oh yeah, baby. Reaching a dizzying top speed of maybe 9 miles per hour, I felt like a superhero racing to and fro in the airport, searching for bad guys.

I didn't find any, however. Probably because the TSA guys were busy patting them all down.

Delta also has a help center that graciously provides temporary housing for people who have missed connecting flights. 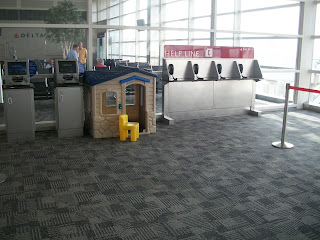 In my wanderings, I also discovered that Detroit is nothing if not generous with its water supply. 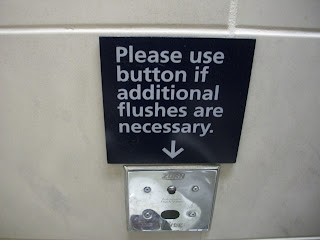 After a half hour or so of flushing, I tired of standing around in the stall and wandered off to my gate where I was whisked away to Utah on another flight featuring even more lightly salted peanuts.

Utah–for those of you, like me, who have only been over or around it before–is really, stunningly lovely.

Here's the sunrise view out my hotel room window. 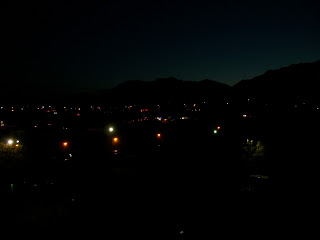 Have you ever seen prettier lights on a Wendy's restaurant?

No, but seriously. Look. 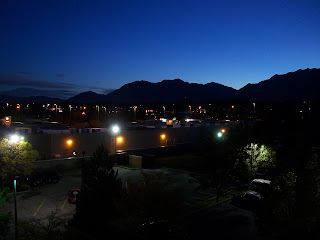 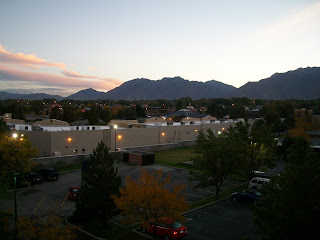 My delightful hostess, Donita  picked me up and took me to Grace Lutheran School where I was greeted by even more amazing views. 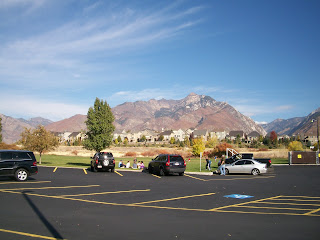 And here I am with Donita. Please note that she is much more photogenic than I.

Everyone in the school was wearing tattoos of Twelve Terrible Things in a brilliant, but slightly flawed attempt to win my "Free Books For Life" Contest. 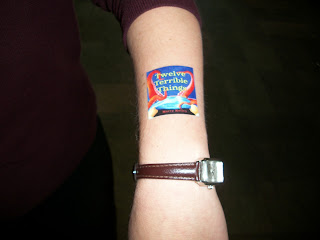 It was hilarious, but I had to disqualify them because the winning tattoos cannot actually peel off.  I'm a stickler like that.
Donita said that she suspected there might be some upset parents if they tattooed all the kids without permission.
I say you can't make an omelet without breaking some eggs.
We have agreed to disagree on the matter.

They had also created a wonderful bulletin board. 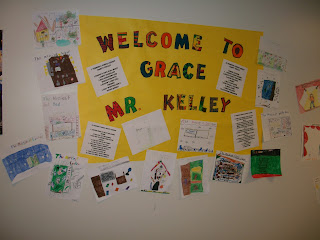 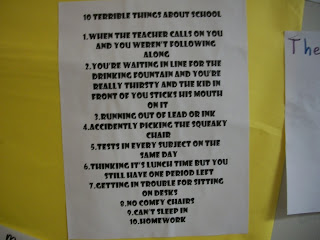 My new friend Lilly also had me sign her cast.


The kids and teachers were a lot of fun and I had an awesome time, but all good things must come to an end - though I've never been sure why that is.

The day wound to a close and I staggered back to the hotel (and by "staggered" I mean that Donita drove me) and I suffered through a few grueling minutes in the hot tub. Nobody said that being an author is easy.

Donita picked me up for dinner and reported that I had managed to displease at least one student because I had yet to post anything on my blog about their school. It had, after all, been nearly an hour.

I dragged Donita, possibly against her better judgement, to a great Indian restaurant where we enjoyed a toe-curlingly delicious meal. She then gave me a brief tour of Salt Lake City where I saw, along with the mind-bogglingly huge headquarters of the LDS church, the most amazing spectacle I have witnessed in my entire life:

A single street corner with 3 separate taco carts on it. THREE!!!

I could be wrong, but it appears that Salt Lake City may be the new taco headquarters of the universe.

There was also a Himalayan Restaurant that I'm dragging Donita to if I ever go back to Utah. At least, I'll go there if lightly salted peanuts go well with yak milk.

I saved some from the flight home. Just in case.