On the Easel Right Now 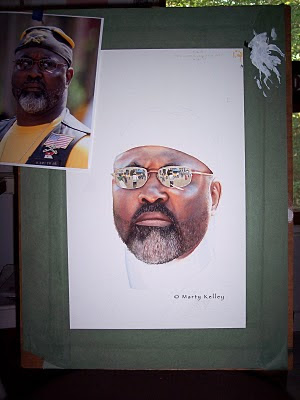 I've been spending a lot more time daydreaming about the life of a reclusive artist, painting away in a filthy garret studio, sipping red wine and acting all sensitive and stuff.

Frankly, it's an unappealing sounding life.
Except for the painting part.
And the wine, I guess.

I've been doing a lot more portrait work lately and this is my latest venture. I found the photo online and absolutely loved the colors on this guy's face. Dark skin has always been a challenge for me to paint in watercolor because so many of the brown pigments lift right off the paper if you paint over them again.

So for this one, I tried something new - no browns. This is painted entirely (so far) from 5 paints: 2 blues, 2 reds, and a yellow. I also wound up using a very small amount of white in his beard (for the fine hairs on his cheeks), something I rarely use.

There's still a lot more work do do on his face before I even get to the rest of it. His lips aren't finished and I suspect there will be more work to do on the reflections in the glasses.

I have no idea how many hours I've put into this one so far, but I suspect I'm due for a few hundred more before it's finished.

As a ridiculous side note, I really enjoy the contrast between this and the sketch I did in my sketchbook last night. 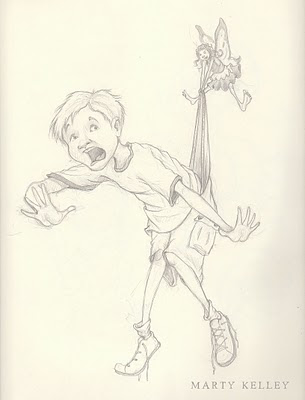 Celebrating the End of Summer by Sitting in the Car.

A few days ago, Kerri and I realized that summer is rapidly drawing to a close and we had not once heard the plaintive cries of "Are we there yet?" drifting up from the back seat of our car.

We chastised ourselves for our appalling lack of concern for our children and promptly packed them into the back seat for a long drive up to Mount Washington where we would celebrate the end of the long car ride by driving up the mountain.

Then driving back down the mountain.

I have hiked up many mountains in the White Mountain region (see previous posts to read about all my exciting adventures with Julie of the Wild).  On those hikes with Julie of the Wild, I have had ample opportunity to view the splendor and beauty of the roiling miasma of clouds that perpetually enshroud the summit of Mount Washington.

Mount Washington is known for having some of the worst weather on the planet, so we prepared for our expedition the same way the original explorers did. By tossing some sweatshirts in the back of the car.

After a long ride northward, during which the kids had ample opportunity to whine about how long the ride was, we arrived at the base of the mountain and delighted the children by telling them that, not only did we have more driving to do, but the drive will be terrifying, as indicated by the helpful, reassuring sign posted at the bottom of the auto road. 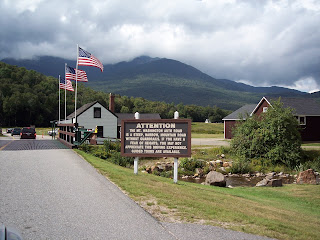 The dark and threatening clouds crowding the horizon provided that added level of comfort that made the journey one that will long be carved into our collective memories.

We started up the road, listening to to the CD provided by the helpful folks who collect the small fortune you must fork over before risking your life on their road. The CD's narrator has a smooth, friendly voice that provides a brilliant distraction from the bladder-emptying terror of the drive up this winding, tortuous road.

Throughout the soothing CD, the narrator reminds you to stop frequently to cool your brakes and to reassure you that, despite having points along the drive with names like "Oh My God Curve", there have been surprisingly few fatalities along the Auto Road (There have been three. I checked.)

While my knuckles were welded to the steering wheel, Kerri was kind enough to take a few pictures so I could enjoy the scenery that I was missing by trying not to plummet off the crumbling edge of the road. 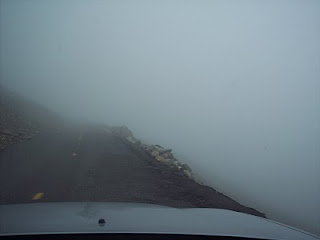 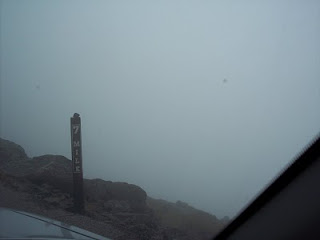 We did arrive safely at the top and were richly rewarded with 45 mph winds and 50 foot visibility.
And rain.
If you are interested in what the summit actually looks like, I can only suggest that you have a look for yourself because I have no idea. The dense fog made any long distance sight-seeing somewhat difficult. 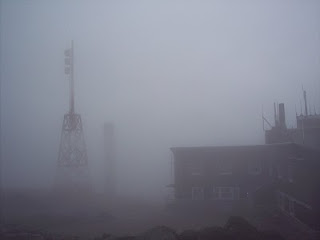 I understand that there are alleged to be some buildings up there and I suspect that this may be them, but it still looks something like a scene out of Star Wars to me. We did manage to find the building that has been chained to the ground to prevent it from being blown away. (Absolutely true.) 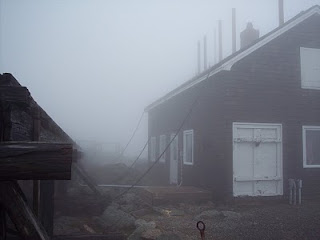 Sadly, I was not chained to the ground and blew away just as this picture was snapped of my family at the summit. 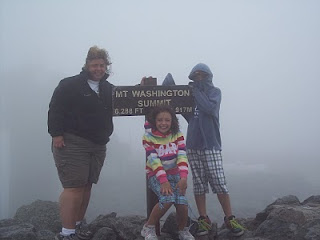 At least, I think that's my family. It was a little hard to see up there.
Email ThisBlogThis!Share to TwitterShare to FacebookShare to Pinterest
0 comments

A New Video For Your Entertainment, Enlightenment, and Edification

Oh yeah.
It finally happened.
The long awaited (by me) video for Summer Stinks - The Super Cool Punk Rock Version is now available for the world to see.

I spent Tuesday afternoon up at Rockinghorse Studios with my family and Steve Blunt and his daughter, Mary and my good friends Julie and Scott.

We ran around and acted like goons and filmed ourselves. The result, I am happy to report, looks like a bunch of goons running around and filming themselves.

At least, I look like that. My friends all look very cool and suave and sophisticated.

It was a lot of fun and you should watch the video a bazillion times so I become a YouTube sensation and am rocketed to fame like all those other YouTube sensations like... uh... you know... um... uhhhhhh...

Rock on.
Email ThisBlogThis!Share to TwitterShare to FacebookShare to Pinterest
0 comments

So, you may have noticed that I haven't been updating my blog as much as I possibly could. That is true, but there are reasons.
No. It's not that I'm a slacker.
I've actually been writing some longer chapter books and for some odd reason, taking a break from writing a book by writing a blog does not seem like enough of a change on some days.

Also, I have been doing more hiking with my pal Julie.

In fact, we were supposed to go for a hike tomorrow, but she flaked out at the last minute citing some weak reason. "Oh," she said, "I just got back from a two day trip to Pittsburgh [or Detroit or somewhere, I wasn't really paying attention] and my plane was delayed and then I had to go up north for a party or something [I still wasn't really paying attention] and now I'm at a bridal shower [or a baby shower or something] and I'm just mentally exhausted."

She did say that she was mentally exhausted. That much I heard for sure. I helpfully pointed out that hiking doesn't actually require enormous amounts of mental stamina.

You see a mountain, you walk up it.

It's basically that easy. Sure, you have to figure out how to turn around 180 degrees and return to you car, but still, the real heavy thinking revolves around what kind of ice cream you get after the hike.

But still, she was unapologetic about wimping out. 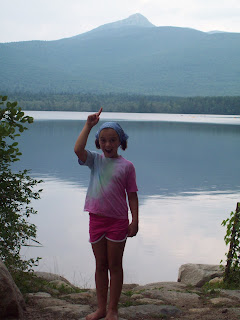 I put this picture in at this point because I know you crazy kids with your clicky fingers. Confronted with several unbroken paragraphs of text, you begin to get antsy and you go clicking away, searching for something more visually stimulating and shiny. So, to keep you here a moment longer, that is a picture of my daughter, after the hike, indicating the mountain that she had just climbed.
The photo is not actual size, the mountain is much bigger in person.
If you don't believe me, go hike it yourself. It seems that about a million other people do each day.

I was recently at the top of tiny Mount Monadonock (pronounced: Mount Chocorua). It is reputed to be the most climbed mountain in the world. Judging by the swarming packs of people on cell phones cluttering the summit, I can well believe it.

Mount Chocorua is likely the second most climbed mountain in the world, as the population of the summit was close to that of Beijing.

Here are some more pictures so you can see the amazing view of other people you get when you climb a mountain. 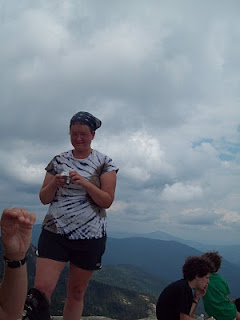 This one is Julie being swept away in a crowd of people. The hand in the foreground belongs to an unlucky traveler who was run down in a stampede of LL Bean clad hiker wannabees. 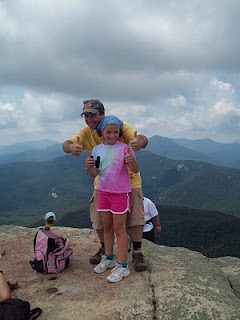 Here is one final picture. This one is of Victoria and me making the universal hiking hand signal for "I made it up to the top of the mountain without plummeting down any sheer walls of slippery granite." We were using the binoculars to try to read the sign at the ice cream stand, but it didn't work out that well. There were too many people in the way.

In the immediate foreground, you can see a sliver of the lady who, for some inexplicable reason, chose the summit marker as a place to practice her yoga poses.Many people like to touch summit markers or take their pictures at them. It was entertaining watching people try to slip their hands under her as she was doing her downward facing dog move or whatever it was.

We made it down safely and did get ice cream. I got Raspberry White Chocolate (pronounced: Mount Chocorua) and it was tasty.

Tomorrow, however, as Julie is so mentally tired, there will be no ice cream for me.