Fall Is Not Easy at Swayse School

You know what's great?
This is great: 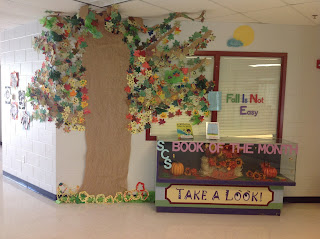 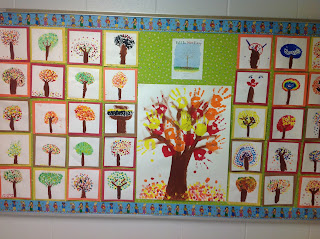 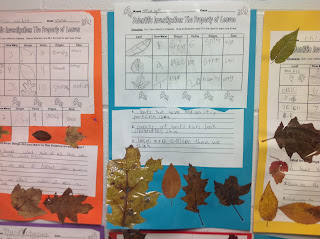 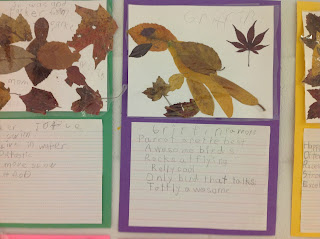 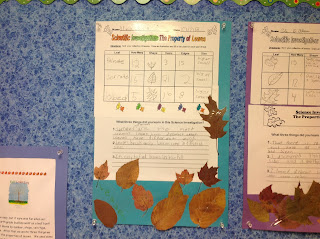 Laura Yacek, from Swayse Central School in Brentwood, NH sent me these pictures when the school chose Fall Is Not Easy as the Book of the Month last October. How amazingly cool is that?

The librarians and the kids worked on some terrific projects that lined the halls of the school. Art, science, writing, and it all looks so fun, doesn't it?

I'm flattered and delighted to see how people use my books and make it such a wonderful experience for the students.

Thank you.
Email ThisBlogThis!Share to TwitterShare to FacebookShare to Pinterest
0 comments

Labels: book of the month, fall is not easy, leaves, projects, swayse

You know how sometimes, no matter how much you like all your friends, no matter how great they are and no matter how many wonderful things you do with them, sometimes you want to install a huge moat around your home and fill it with fire-breathing, jet-propelled sharks with freakin' laser beams on their heads so your friends cannot come anywhere near your house?

I feel that way about all my friends every year at the Annual Gift Swap of Horror. I know they feel the same way about me, so it all evens out. I'm sure that we can all be friends again someday. After the pain has passed.

A typical greeting, when people arrive for The Swap goes like this:

Because we know that, no matter how happy we are to see one another, within a few hours, we will be calling unholy plagues down upon one another for the horrible art we inflict on one another.

For those of you unfamiliar with The Swap, you can click here to learn of its shadowy origins because I don't want to have to write that all over again every year.

We eat and drink and chat amiably, but throughout the evening, there is an underlying current of apprehension and suspicion bordering on animosity. It is nearly palpable at times. You see people taking furtive glances at the pile of gifts, making mental calculations about how much horror each package can contain and offering up silent prayers to the gods of good fortune that they do not get stuck with that one.

Each year at the swap, there is a that one. That gift that is so large, or so awkwardly wrapped, or so asymmetrical and ominous looking that people shudder involuntarily upon beholding it.

This year there were two gifts that fell under that heading.

One was the gift brought by Tim and Katie. It was obviously a triptych, a set of three, identically wrapped items, festively bound in a lively, hot-pink ribbon that assuredly belied the ugliness beneath. Each piece was nearly 4 feet tall and two feet wide, meaning that whoever walked away with it was looking at covering a lot of wall space in his home.

The second one was the awkward bundle that Ben and Ann both lugged into the house and set down with a thud that shook the living room. It appeared to be a wrapped plastic storage bin large enough  to hold the remains of a moose that you ran through a blender. The fact that the gift needed that sort of containment hinted toward something dire, indeed.

After the eating and the drinking and the stealthy inspection of the gifts, it was time for the drawing.

Names were drawn, fates were sealed, lives were ruined.

If pictures are worth a thousand words, I'll save myself a lot of writing here by simply getting it over with. 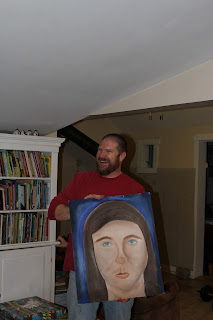 Ben and Ann drew our name and will be spending the next year living with this lovely portrait. Ben is laughing to hide his broken heart. You can see the joy that it has already brought to his entire family. His son, Caleb is not in the picture because he was in the kitchen, washing his eyes with steel wool. 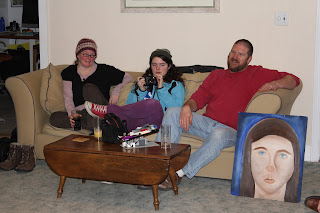 We were next. The Kelley family had the good fortune to draw Tim & Katie's name. The one attached to 2,460 square inches of ugliness, spread over three tasteful panels. 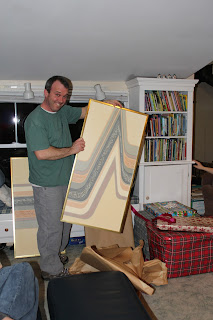 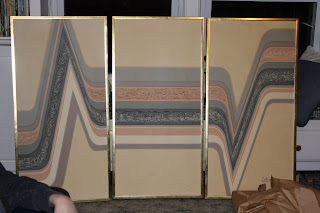 Although the photo does not show it well, the dark gray band running throughout the piece is actually raised and textured so even if I am struck blind over the course of the next year, this piece can still make me unhappy with its awful tactile unpleasantness. Please feel free to drop by and feel it anytime you'd like.

Naturally, I was delighted to know that Tim and Katie would be the next ones to suffer.

And suffer they will. 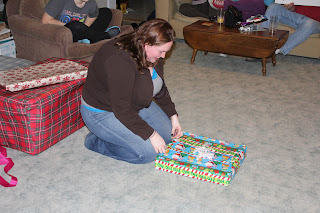 They were sentenced to the gift brought by Ryan and Nicole, two relative newcomers to The Swap. Typically, us old hands love newcomers because they just don't get it. They will arrive with some mildly tacky bauble and leave, crushed beneath a breathtakingly awful, life-altering, steaming slab of horror. It's delightful to actually watch their will to live leave them.

No so with Nicole and Ryan. They did very well last year and eclipsed themselves this year with a brilliant piece that is in such staggeringly poor taste that Ryan actually apologized to the group in advance of it being opened.

Of course, we were giddy with anticipation as Katie opened the package to reveal... 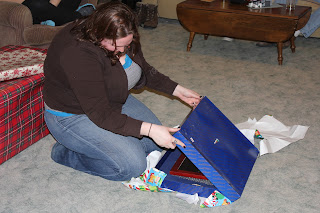 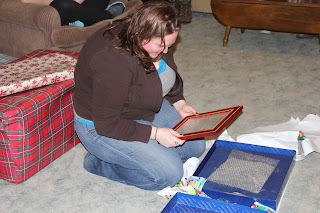 A certificate of authenticity certifying the authenticity of this limited edition, genuine faux-metal commemorative bust of Princess Diana, tastefully displayed in a handsome, certified, authentic frame. 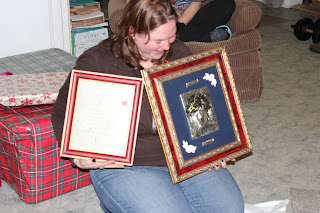 Please take a moment to contemplate the true, tasteless unpleasantness of this piece. 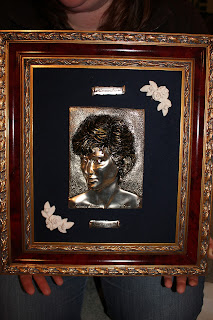 But take heart in the fact that it IS authentic and limited to 8,254,775 pieces. 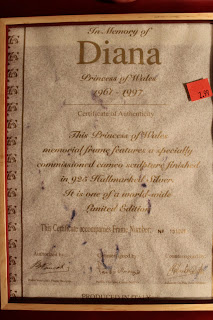 And now, perhaps a moment of silence for Katie and Tim, who will be looking at that every day for the next year or so.

And so, it was time for Ryan and Nicole. Still buoyant from his recent destruction of Tim and Katie, Ryan jumped into the fray with an admirable, manful cheeriness that was richly rewarded with Julie and Scott's contribution. 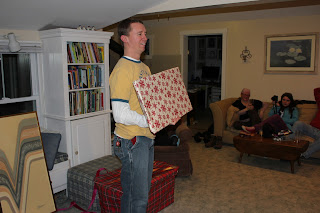 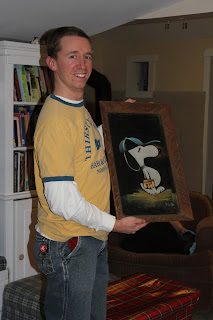 An exquisite picture of Snoopy, hand-painted on the finest imported Mexican black velvet. Although it came with no certificate of authenticity, the words "Hecho en Mexico" stamped into the frame attest to the fine craftsmanship of this piece. 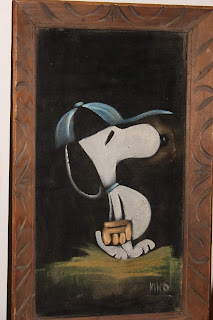 Classy and whimsical, all at once. It speaks to the very depths of the soul, screaming, "NOOOOOOOO!"

This is Julie and Scott's second piece on black velvet, hinting to the fact that they must have a secret supplier of paintings on black velvet. Scott, it is rumored, may actually be a lieutenant in the dreaded Mexican Pinturas de Terciopelo Negro Cartel.

Throughout all this, Julie and Scott sat stoically, alternately glad that they had not gotten Tim and Katie's triptych and deeply morose about the fact that they had drawn Ben and Ann's bucket o' love. 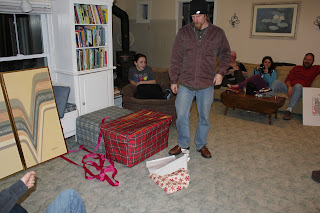 Scott approached the container bravely, like any good Mexican Painting Cartel member would. With Julie at his side, they opened it 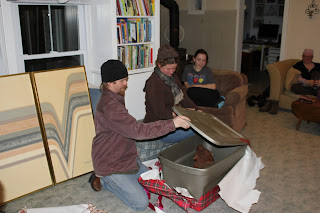 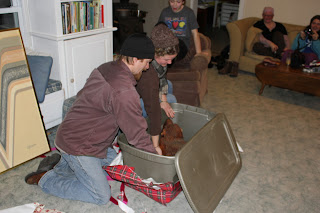 an authentic (although non-certified), wooden beaver, lovingly hand-carved with a chainsaw by some master artisan. 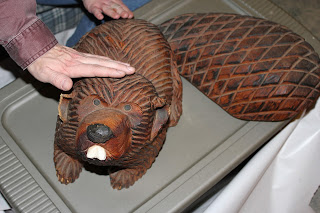 Note the attention to detail and almost lifelike texture on the tail. Not to mention the eyes, which seem to look directly into your soul as it contemplates how best to kill you while you sleep so it can build a dam with your still-warm bones.

Ryan suggested that the beaver be named Justin and, no matter what Scott and Julie might say, that is the beaver's name. Justin Beaver.

After that, there was nothing much more to say.

Former friends sullenly packed up and trudged out to their cars to head home to begin recovering so they can spend another year scouring the earth, searching for a gift for next year.