You're Allergic to WHAT?!? (with disgusting medical-grade pictures!)

I'd have to say that it all started with the new pool and the mysterious, magical green water that we filled it with.

We have been saving our pennies for several years in order to buy a nice pool.  I have found out the hard way that pools scavenged from the local dump tend to be not everything that one desires in the way of summertime enjoyment. They tend to leak and collapse at inopportune moments. Like when you're languidly floating around in them, drinking a delicious rum-based beverage of immeasurable joy, listening to Bob Marley singing about three little birds. The sun is shining on your gently smiling face. There isn't anything in the world but you, your drink, and Mr. Marley. And, it appears, a grave structural flaw in your pool. And then, you're sprawled across your soggy lawn, wondering what happened to your drink.

If you ever find yourself in this position, refrain from the real, and very understandable, urge to salvage your drink by slurping up the pool water that is slowly disappearing into the grass beneath you. The chlorine and the ants will give even the best drink a slightly off flavor.

I speak from experience, people.

So, a couple years ago, we upgraded to one of those ring-top pools purchased from that recognized dealer of pool-related excellence, Toys-R-Us. The box, covered with pictures of happy families, frolicking in the crystal clear water of their new pools, promised that the entire thing could be installed in minutes.

I mixed my rum-based beverage of immeasurable joy and opened the box, which failed to mention that you can also measure the age of the universe in minutes if you are so inclined.

Minutes stretched into hours which stretched into days. The ice cubes melted in my drink. My children stood by in their bathing suits, helping me along by asking every 30 seconds if the pool was ready yet. They clearly thought that I was hogging all the fun as I spent 3 days in the blistering sun, digging up our lawn and wheeling in hundreds of pounds of sand so we could have a somewhat level place to put the pool. It was fun, of course, but not as much fun as I made it look like.

I was thrilled to discover that after digging up the grass, leveling it off, and hauling in all the sand, the pool itself did actually unroll and inflate in just a few minutes. Then, with our weak and impoverished well, it took another week to fill it up enough for the filter to work.

So we bought a bigger, better, faster, shinier filter that cost more than the entire pool.

Then the pool popped.

So we started saving and finally bought a brand-new, real pool with a real filter and had it installed by real pool installer guys complete with butt cracks hanging out of their pants so you know they're official.


But before the installers could work their magic, the dump truck fairy had to deliver 10 tons of stone dust to my home.

No, actually, I'm not exaggerating. 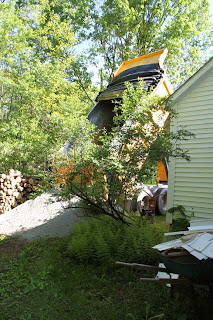 And, as an added bonus, when the installers were finished, there were 5 tons left over. Anybody need some stone dust? Bring a wheelbarrow and a shovel.

So the pool went up and it got filled with three giant tanker trucks full of water. This was exciting to watch. See how excited I am? 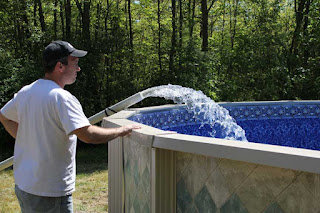 The water had a delightful greenish cast to it that made the entire pool look like a magical mermaid swimming grotto, where mermaids splash and play in the tropical sun.

Or a nasty stagnant swamp, if you lack imagination like some people in my family whom I am married to.

But, through the magic of chemical enhancement, the water cleared up overnight.

And the kids, who were vibrating with excitement, jumped into the pool.


You will notice how happy Tori looks. She looked much less happy two minutes later when her pink, inflatable pony suffered a tragic blow-out, rendering him useless. You might also notice the look of unbridled horror on Alex's face. That look was mirrored on all our faces just a few short minutes later when Alex emerged from the pool looking like this.


I almost spilled my drink, but because of past experience, I now use a sippy cup for all my rum-based beverages of immeasurable joy.

These hideous hives covered much of his torso and, naturally, we were deeply concerned.

What if whatever horrible disease he had contracted had contaminated the sparkling clean pool water, ruining it for the rest of us?

The hives disappeared a few minutes after they appeared. Seeking a scientific explanation for what was going on, we tossed Alex back in the pool. Because that's how scientists work, I believe. A result must be repeatable. And it was. The hideous hives reappeared.

And I still didn't spill my drink.

Because I had finished it by then.

We spent two days trying to figure out what was happening. Nobody else was reacting to the water like that. Mostly, the rest of us were reacting by splashing and swimming and playing and assuring Alex that he really wasn't missing much because the pool wasn't actually even that much fun, really.

In between swims, I spent many hours poring over medical sites on the internet, a habit I do not recommend to anyone for any reason. You start looking for information on hives and suddenly you find yourself diagnosing it as a rare flesh-eating bacteria that will totally ruin the pool for everyone.

Also, I do not recommend that you do any sort of image search for full body hives if you have a tasty beverage in your mouth. Or if you ever want to eat again.

I searched and searched until I found something that perfectly matched Alex's symptoms:

He is allergic to cold.

Go ahead. Look it up.

A carefully performed in-home medical procedure (a phrase I have never used in reference to myself before) involving an ice cube and Alex's extreme discomfort for 5 minutes reproduced the hives brilliantly in the exact spot where the ice cube had been.

A trip to the doctor the next day confirmed the results.

"Gonna be a long summer for you, buddy," the nurse said to him.

"Can I have the cool new pool float that mom bought you?" I asked.

It turns out that his case is a mild one and the hives can be easily controlled with a dose of anti-histamine before he gets in the pool.

But he can't go to the drugstore by himself.

And I still want that pool float.


Email ThisBlogThis!Share to TwitterShare to FacebookShare to Pinterest
3 comments

Marty World! Get your tickets now.

I spend a considerable amount of time sitting home, alone, staring at a computer and tapping little buttons on it.

My contention is that it is far, far better than sitting in an office with a bunch of people, staring at a computer and tapping little buttons on it. This is primarily because at home, I can be in my pajamas, something likely to cause comment at even the most casual businesses.

I generally enjoy my job immensely. There are times, however, when it eclipses even being the taste testing guy at Ben & Jerry's.

Like, when you go to a school to do an author visit and, upon walking in the front door, you are greeted with a tableau like this:

This is what I saw when I walked through the doors at Inter-Lakes Elementary School in Meredith, NH on Monday.

I was so bedazzled by  the banner that it took me a moment to recognize the full scope of the amazing work of genius here. Alesia Parks and her team of magical elves had created an amazing diorama of my books.

The disappointment that they had not actually built a roller coaster was brief and short-lived, however. Because Beckie Grinavic and Jenny Stevens had created a Marty Kelley Story Walk at the local town library. A story walk is when somebody takes your book and cuts it all up into about a million little pieces and then puts it all back together along a path in the woods so a couple dozen kids can go shrieking through nature, looking for book pages hanging in decidedly unnatural places.

It was a LOT of fun.

And, since it was raining, it was sort of like a water slide, which is almost as good as a roller coaster. 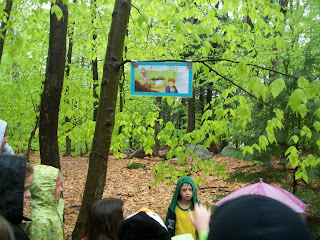 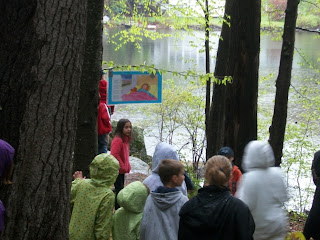 After we had followed the magical, literary path through the woods, and just when the kids thought that no day could ever be more wonderful, they were each allowed to run to the edge of this lake and throw in one item.

Sadly, it wasn't stipulated that the item must be inanimate and several children tried to hurl me into the water. I was lucky that they were tired from all the walking and thus were unable to lift me.

So now, as I site here on my couch, waiting for my shoes to dry, I'm thinking of ways that a school might be able to install a Marty Kelley Reading Roller Coaster.

Email ThisBlogThis!Share to TwitterShare to FacebookShare to Pinterest
2 comments