Let me get this out there right away.
The ONLY reason I go on these ridiculous hikes with Julie is because we ALWAYS get ice cream after the hike.
ALWAYS.
(Are you reading this, Julie? ALWAYS!!!)
So when we finally braved the treacherous and outrageously difficult dual summits of Mt. Flume and Mt. Liberty last Friday, I cannot be blamed for expecting to be rewarded with an ice cream sundae the size of a 1959 Buick.
Julie insisted that she would rather have iced coffee.
Clearly, she had gone insane. There is no other explanation.
I even have photographic proof from our pre-hike photo.
As so often happens, I failed to see the warning signs until it was way too late.
Adding to my case for Julie's advanced state of craziness is the simple fact that we climbed these mountains at all.

Mt. Liberty and Mt. Flume are described in the guidebook like this:

"Oh, the humanity. What are you thinking? DON'T, under any circumstances, EVER climb these mountains. You will regret it. Why don't you just go out and get some ice cream and SAY that you hiked them. Nobody will ever know."

But rather than following the guidebook's sensible advice, we headed off into the chilly morning air to climb two mountains and suffer needlessly. And without ice cream.

The hike began with a mile of walking along a paved bike path, just to reach the trailhead. We chatted of this and that, marveling at the fact that it could possibly be so cold here in the White Mountains of New Hampshire in October. Who would have guessed?

We turned off the pavement, into the woods and began a leisurely stroll through the woods. A leisurely stroll designed exclusively to lull us into a false sense of safety and well-being before the mountain could roar up and give us both a dope-slap.

We traipsed merrily along in the woods and soon began to get warm and decided to shed some of the hundreds of layers we had worn for the trip. At a trail junction, Julie took off her vest and the pants that she had brilliantly worn over her shorts.

I, less brilliantly, had worn some very fashionable spandex pants (pictures not included) under my regular pants. Removing them required removal of my pants first, followed by a tricky balancing act while trying to slide the spandex off and not step onto the cold wet ground. When I was about half-way through the ordeal, another hiker came striding into view from the foggy, misty woods.

I had chosen to simply change in the middle of the path, as there was obviously nobody else around for miles except Julie and she was busy looking at maps or engaging in some other useless activity. I tugged at my spandex pants, trying desperately to yank them back up so I could get my regular pants up. A simple over-balance sent me hopping across the path on one foot with my pants around my knees, directly in front of the approaching hiker.

"Nice morning," I said, assuming a nonchalant pose and smiling suavely.
"Warms up fast, doesn't it?" he asked, striding away quickly and disappearing into the misty shroud of the forest.

I managed to get myself changed without any serious personal injury or charges of indecent exposure, and we started out once again, headed for the foot of the Mt. Flume slide, now a mere 2.6 miles away. 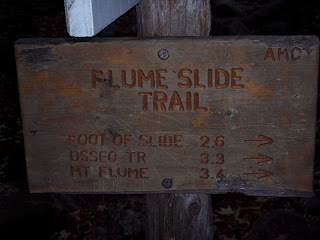 I should probably explain that a slide, when hiking, is not a delightful piece of playground equipment designed to bring joy to all who use it. A slide is a horrible slash of rock that runs nearly vertically up the side of a mountain. It is designed to kill you in painful and spectacular ways, but only after causing you unimaginable amounts of pain and suffering.

The day was warming up even more and, rather than risking more indecent exposure charges, Julie used the opportunity to take a refreshing dip in the icy mountain stream.

After her swim, we decided that a snack might be in order.

I'd like to point out that eating is an integral part of any real hike and that near the end of every single hike, the talk revolves exclusively around food. We typically each bring an assortment of goodies and share them.

Julie brought along some trail mix and commented, "I got this kind because it was cheap."

A brief view at its contents explained why it was so cheap. 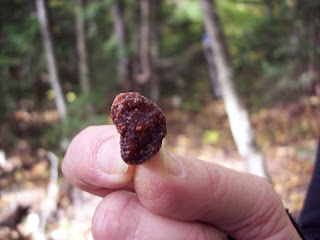 "Oh my god. Is that a dehydrated heart?" I cried when Julie pulled this hideous lump from the trail mix, "Because if it is, you can have it."

Closer inspection revealed that is was actually a dried, salted strawberry, which is exactly as delicious as it sounds.


With a cold foot and the foul, salty taste of dehydrated strawberry scorched onto her tongue, Julie suggested that we start off again before things could get worse. As if in answer to her suggestion, we almost immediately lost the trail  and wandered aimlessly in the woods for a few minutes, lamenting the fact that we were going to die with the taste of salty strawberries in our mouths.

We eventually found the trail again and walked for a few months before catching our first glimpse of the fabled Mt. Flume Slide.

"Hey, Julie. It's been fun. I'll be going home now," I said, turning and heading back toward the car. I took off my pack to get a drink before heading home. I leaned against a tree and was rewarded with the most miraculous sight in nature:
Enchanted by what other wonders might possibly await us at the top of the mountain, I reluctantly agreed to continue the climb, which got significantly steeper. 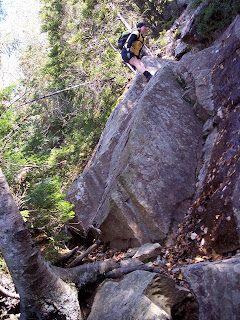 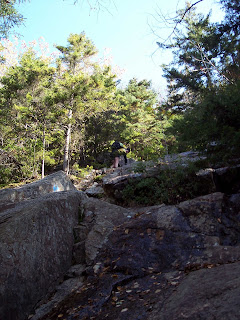 0.8 miles doesn't sound like far, I admit, but when it is made of slippery, wet rock jutting directly into the sky, it takes on a new sort of meaning.

Julie somehow managed to tune out my constant whimpering and whining and complaining and we found ourselves at another trail junction.


We finally crested the hill that opened onto the summit and were rewarded with some glorious views. 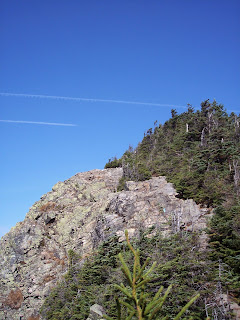 We settled in for lunch and this was the view while we ate.

After lunch, we trudged onward toward the summit of Mt. Liberty, visible in the top right of that picture of my foot. It was a mere 1.2 miles away and after the climb up the slide, we felt like we were floating. It was a lovely, deeply wooded hike that opened onto a rocky, barren summit, inhabited by a french guy who did not budge from his spot at the summit marker.

A word about hiking etiquette: Everyone who climbs mountains, likes to touch the summit markers hammered into the rock. It's silly, but we do it. It makes the entire ordeal worthwhile just to touch that piece of metal. It gives you a sense of accomplishment.

"I hiked a ba-jillion miles over slippery, wet, steep rocks. I have blisters, aches and pains, poison ivy, altitude sickness, dehydration, hypothermia, and vertigo, but I got to touch that marker."

So when you do finally reach that marker, it is very poor form to squat there and eat your lunch hovering over it so nobody else can get near it without climbing around you. Yes, I'm talking to you, random french guy!

I would also like to take this opportunity to discuss the sphincter-puckering drop you see in the photo behind Julie. There are times, when hiking, when a drop appears very impressive, but actually glides gently away from the summit. This was not one of those. The drop behind Julie is exactly as terrifying as it appears to be. A rock-studded plummet to certain, splattery death.

"Go out there," Julie coaxed, "I'll take your picture."

You will notice that there are no pictures of me on that summit. I was clinging desperately to the craggy granite, explaining to Julie that I am terrified of heights.

"This probably isn't the best time to be letting me know that," Julie said, "And, anyways, it's not that bad."

"I have almost wet myself climbing a step ladder," I told her, "This is like a million step ladders piled on top of one another."

"You wet yourself?" Julie asked, missing the point entirely.

"I said 'almost'," I explained, "Just like I almost got to the summit of this mountain."

"Come on," she pleaded, prying my fingers from the rock. The french guy sat back and watched impassively.

Julie succeeded in prying my fingers from the stone and getting me out onto the exposed summit. There is no picture of the event because I was shaking so badly that I appeared only as a slight blur in the picture.

I did not wet myself.

And I managed to snap one picture of the view from the summit before I got all woozy. 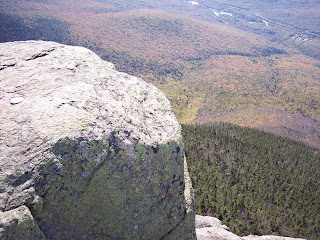 And then I changed my pants and we headed down the mountain.

We passed a small but impressive pile of animal poop that I had to photograph simply because of its startling similarity to the dehydrated strawberries that Julie packed. The poor creature that left this had obviously been feasting on the strawberries thrown away by other hikers who had bought the same cheap trail mix Julie did.


It was a long walk down, but with very little chance of being dashed to bits on jagged rocks. The path wound through the woods, leading us slowly and painfully down the mountain toward the ice cream that I still assumed we would be eating. If you imagine a steep, irregular staircase made of slippery, round, loose rocks that leads sharply downward for 4 miles, you'll have a good idea of what the descent was like.

We were at the point in any hike where talk gravitates to the subject of food and stays there permanently. Things were going splendidly and we drifted easily from food group to food group. I explained my theory of carbohydrates to Julie (your brain uses glucose as fuel; carbs make glucose; therefore, carbs make you smarter). We were passing the time pleasantly until we get around to the inevitable subject of ice cream. And Julie said that she'd rather have iced coffee.

And the world shimmered and faded to black.

I have no recollection of the rest of the hike, shrouded as I was in the bleak hopelessness of a hike without ice cream. I suppose that we did make it down safely, as I have a picture that suggests a happy ending.

My smile is fake. A thin veneer of joy slapped over a bottomless pit of hopelessness and despair and sore feet.

Next time, I'm packing ice cream to eat on the summit. And some dehydrated strawberries for Julie.
Email ThisBlogThis!Share to TwitterShare to FacebookShare to Pinterest
0 comments