The Sweatiest Road Trip Ever - Day 7: The Departure and the REAL Sweating Begins


Not that you really need to know this, unless you are married to me, which most of you are not, but I do not wake up gently.

If I wake up on my own, I am fine. Even an alarm clock tends to be unproblematic, if unpleasant. But if you come up to me while I am sleeping and place a hand on me and gently shake me, I will shoot out of bed like I am being chased by a really ugly duck.

Just ask Tori. Who woke me up like that this morning. And scared the jumpin' be-jeezus out of both of us.

Last night, in an attempt to stave off having to get out of bed this morning, we gave Tori a key to our hotel room. Since she is clinically insane and chooses to jog every morning, we suggested that she could jog over to the hotel and let herself in. Then, we would gladly treat her to a free, crappy hotel breakfast as a fancy way to say goodbye before we leave her alone in Florida for 3 months.

It appears that the key did not work.

She banged on the door and called Kerri a couple times but, because of a leaky air conditioner in our room, maintenance had installed a powerful and loud fan to attempt to dry the puddle of water that pooled on the carpet.

Except the fan, of course.

Tori eventually gave up and sat in the hall outside our room, always keeping a wary eye out for Leonard, the ugly duck of doom.

She banged on the door listlessly a few more times and, somehow, actually managed to rouse Kerri. Kerri let Tori into our room, Tori tried to wake me gently, and we both had to change our undies before heading down to get some crappy hotel breakfast.

All-in-all, a great start to our last day with Tori.

Our breakfast was, it will not surprise you, crappy.

We packed up and drove Tori back to campus to say goodbye.

We watched Tori slowly disappear into the shimmering heat-waves reflecting up from the pavement and then we climbed into Squanket to begin the next leg of our journey: Key West.

My only knowledge of Key West comes from songs by The Beach Boys and Jimmy Buffett and books by Carl Hiaasen and Dave Barry. They make it seem like a laid-back, rum-scented tropical paradise populated by quirky eccentrics and roosters.

At least there were roosters.

In case you need a brief refresher, Key West is waaaaaaay, way down at the tip of Florida. You get there by driving down an endless series of bridges, connecting a series of small islands, all of which are covered with trash and run down business districts hoping that you will overlook how filthy everything is if they open a strip club.

I expected a long drive along sparkling beaches. I got McDonalds and drive thru liquor lounges.


There were parts of the drive that were lovely, but I was seriously shocked by just how dirty and run down most of places along the Intercoastal Highway were.


Kerri was intent on making good time getting to Key West so there were a few places that, once again, I was not allowed to stop at.


The longer we drove toward Key West, the more depressing it got.

We did, eventually, actually make it all the way to Key West. Our hotel room wasn't ready so, naturally, we climbed back into Squanket and went on a small expedition.


Key West is a great place to sweat, get drunk, and shop. If you had other plans, you might consider any other spot on the entire planet.

We passed the gauntlet of lounging lizards and found a house with a historic placard listing it as the southernmost house in the United States. And then, just a few houses south of that, we came upon a long line of people, indicating that we had arrived.

We didn't know where we were, but it must be good if people were willing to line up in this heat. So, naturally, we lined up for whatever it was.

I know I have mentioned this a number of times, and believe me, the people on the trip with me heard it many, many more times, but it is HOT there. While we waited in line for whatever we were waiting in line for, my kneecaps sweat. It was a slightly alarming experience. A bead of sweat trickled from each kneecap, ran down my shin, and soaked into my already saturated socks.

I thought you need to know about that.


It soon became clear that were were waiting in line to take pictures at the southernmost point.

We walked around bit more and decided to go back to the hotel before our shoes melted. We passed a few more places that Kerri wouldn't let me stop.

And, again, I was surprised by just how much Key West was not the quiet tropical paradise I envisioned. I still blame the Beach Boys.


We went back to the hotel and rehydrated in the pool, which was lovely. There was a reggae singer with steel drums playing poolside and it was very relaxing.

After a few hours in the pool, feeling rehydrated and refreshed, we went out to get some dinner. Alex wanted BBQ again and, as we were 90 miles from Cuba, likely as close as I will ever get, I needed...

I managed to shake off the existential sadness that my sub-par sandwich caused and we climbed on the hotel's shuttle for a few hours in downtown Key West at night.


Once downtown, it was immediately apparent that the only reason to come downtown was to get staggeringly drunk or shop for tacky tourist stuff.


Kerri suggested a bit of shopping.
Again, we compromised by doing what she wanted.

Alex found a candy store with a vast and, at times alarming, selection of candy. 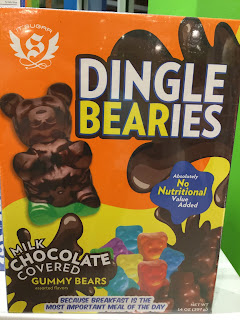 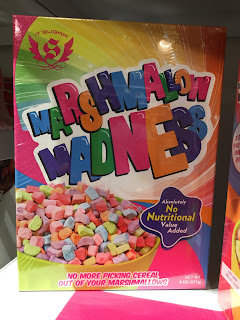 After the candy store, we headed to the world's tackiest souvenir shop, where I felt immediately at home.


Soon - very soon - we had absorbed all the Key West atmosphere we required in this lifetime and we headed back to the shuttle stop.

We waited for the shuttle, sweating and watching the swirling, drunken masses stagger past. Soon a shirtless man weaved his way over to a woman sitting on the sidewalk in front of us.

Whether or not it was his fault will be a mystery that I'll take to my grave.

The shuttle came and whisked us back to the hotel.

Thank you Kerri and Marty for taking this excursion and saving me the effort! Like Kerri, I too must have romanticized this destination. You have cured me of any further curiosity! I'll read about wild adventures through Carl H.