Why Does Julie Want Me Dead? 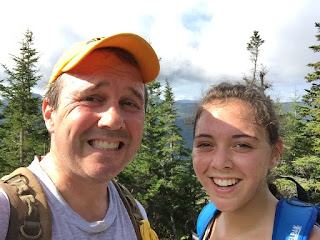 Do you see the forced smile on me?
Do you?

And why, you might ask, am I smiling this way?

I am smiling that forced smile because I just discovered that Julie, one of my best friends on the planet, evidently wants me dead. And not just any sort of dead, but a death that is slow and painful and lingers over the entire 6 miles of the world's most sweaty, smelly, rocky hike.

Julie and I have hiked many a mountain over the years. And, in fact, she just recently completed hiking all the 4,000 footers in NH. I think there are about 26 million of them, so it's quite an accomplishment.

So, naturally, when I wanted some advice on a pretty hike to take with my daughter, Tori–one with a great ridgeline–I turned to Julie for advice.

And she tried to kill me.

She suggested that perhaps Tori and I should hike a little trail called Webster Cliff Trail. "It's short," she said, masterfully concealing her evil laughter. "I've never done it, but it looks really great. And it's Monday so you should have the whole trail to yourselves. I'd go with you, but I'm not insane...uh... I mean, I have to be in a meeting. All day. Darn it. Well, have fun!"

And, Tori and I, being trusting souls, took her advice.

Tori and I left the house bright and early to begin the long drive up to the Great White North. As we drew closer to the trailhead, we saw towering cliffs above us along the road.

"Wow," Tori mused. "Imagine if the trail went on those cliffs? That would be insane."

Our hike began along a short, meandering, wooded trail. We passed several groups of through-hikers, who were packing up campsite along the trail in preparation to heading back out on the trail. Webster Cliff Trail is, in addition to being lethal and painful, part of the Appalachian Trail, a 2,000+ mile long walk in the woods that people take in order to really get in touch with their personal, intimate bodily odors.

Passing through-hikers on the trail is like getting hit in the nose with a cinder clock. Each hiker is possessed of a unique, pungent smell that clings to you and coats the inside of your mouth as you pass them.

I suspect that they gather together at night at secret campsites along the trail and compare odors.

Tori and I waved away the dizzying fumes and continued along the trail, still oblivious to what was in store for us.

The trail began to slope upward sharply and we began to sweat. A lot.

I generally use my cap as a sort of altimeter. The line of sweat rises as we gain altitude on the hike.


We stopped for a drink and Tori discovered that one of her water bottles was empty.

But at least we were short a full bottle of water.

We slogged upward along the trail. The guide book suggested that there were a few places where the going was tough and you would have to scramble over rocks on your hands and feet.

"The book said there would be a few places like this," I reminded her.

We scrambled over the wall.

"See?" I said, picking the gravel out of my knees. "That wasn't too bad. And now it will be easy."


"It will?" Tori asked, indicating the next wall along our path.

We scrambled over and found ourselves on a terrifying precipice overlooking all of creation.


This seems like as good a time as any to confess that I am terrified of heights.

But I had a lot of opportunities to get in touch with my fear and really get to know it intimately.

Tori scrambled up past me and poked her head back over a precipice. "Hey!" she called. "I found some water!"


I slogged up to her and found a pool of human tears left by many hikers who had come before us.

We slogged ever upward into the thinning atmosphere, made rich by the tangy essence of through-hikers who kept sharing their stink with us as we met them along the trail.

And, did I mention the walls that the trail is made of? 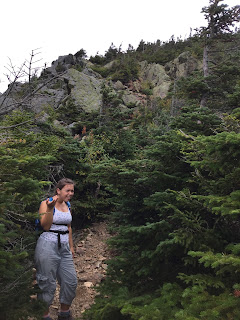 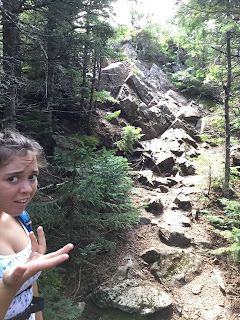 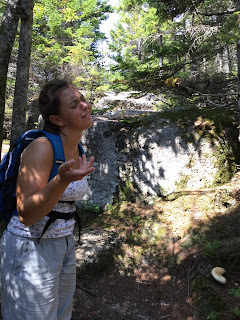 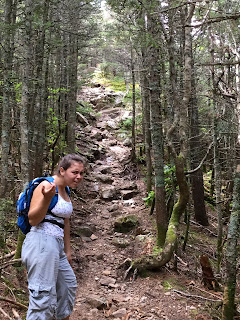 Tori stooped to say hello to a tiny toad along the path.

"You probably shouldn't touch that thing," I told her. "It could have through-hiker stink on it."

Tori scoffed and continued up the giant stone wall disguised as a mountain. 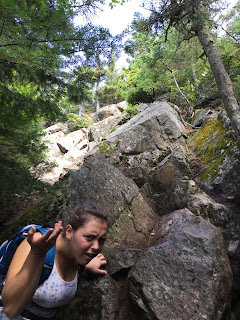 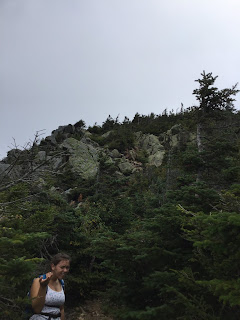 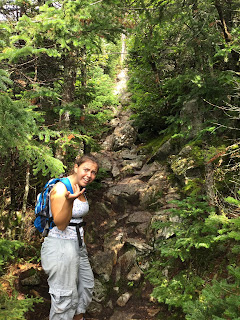 She soon disappeared from view and I found her enjoying another scenic overlook.


We enjoyed the view as we ate our delicious PB&J sandwiches. 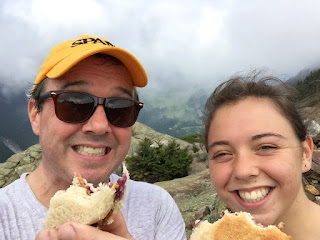 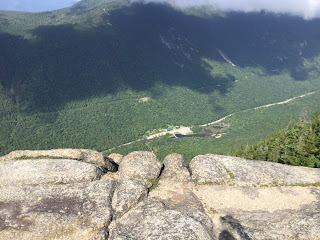 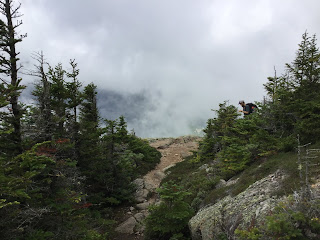 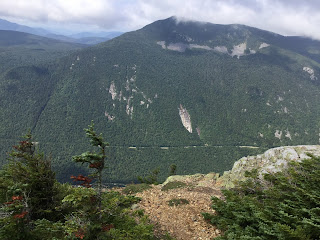 "Do you think this is the summit?" Tori asked, indicating the huge cairn on the trail.
I shrugged. "Must be," I said. "That wasn't too bad, was it?"

Then a couple through-hikers wandered onto the overlook with us. We discreetly covered our noses, adjusted ourselves to be upwind,  and struck up a conversation.

"Wow," the guy said. "This has been a tough one. We've been on the trail for about 4 months. And we got rained on last night. Everything is soaked."
His wife nodded, tears welling in her eyes.
She was not having a good time.
The man indicated the trail toward the road. "How far is it to the road?"
I shrugged. "About an hour and a half."
"Is it bad?"  he asked.
I nodded. "Yeah," I said. "It's bad."
"This is going to suck," his wife mumbled.
And off they trudged, disappearing into the swirling clouds. "Enjoy your climb to the summit," he called back over his shoulder.
"Summit?" I asked. "This isn't the summit?"
His laughter was carried away on the wind.

I don't have many photos of the trail beyond this point. I was too busy clutching onto rocks for dear life to stop and take photos. I did manage to get one photo of the view in the other direction before we set off for the summit.

We did get a few more scenic vistas to help me more fully embrace my mind-bending fear of heights along the way up. 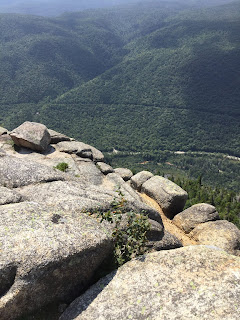 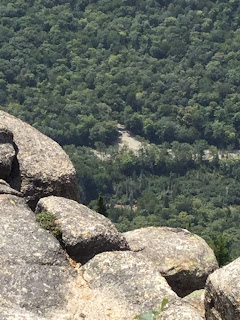 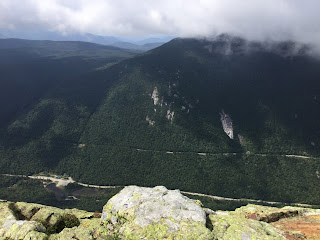 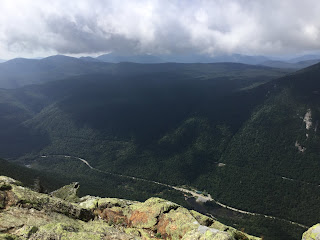 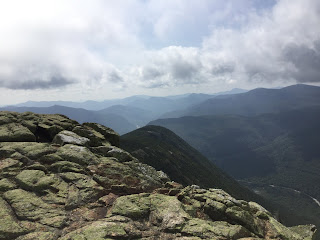 We eventually found the summit and joy reigned supreme.


Our descent was, like the ascent, steep.
Very, very steep.

On the plus side, most of the effects of the toxic toad seemed to have worn off and Tori was fine except for the occasional, unavoidable dizziness from through-hiker miasmas we passed through.

About an hour into our descent, we passed the husband and wife through-hikers we had met earlier. They were sitting in the middle of the trail, smelling terrible and eating some sort of dried jerky. Possibly toad.

"Are you headed south?" he asked. "Toward the road?"
I nodded. "Yup."
He shook his head and sighed. "I TOLD you we were going the wrong way," he groaned to his wife.
She sighed and more tears welled up in her eyes. I suspect that she alone filled up the pool of tears we had passed earlier.
He turned back to me. "We stopped in a stealth campsite to have some lunch and when we got back on the trail, we started in the wrong direction."
Rolling my eyes and asking how they didn't notice that they had been climbing up instead of climbing down for at least an hour seemed indelicate.
"It happens" I sighed. "Well, have a good rest of the day."

I suspect that they did not have a good rest of the day.

We spent much of the rest of our day scooting down a mountain on our butts. 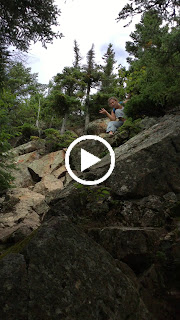 And then, just 85 hours after we left, we were back at the parking lot. It was easy to spot because of this guy's awesome parking job. 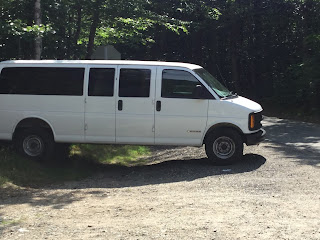 That was fun, wasn't it, Tori? 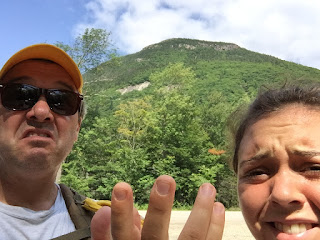 Next time, we will make Julie come with us.